Our Wedding Story: “My knees gave way when I saw him” 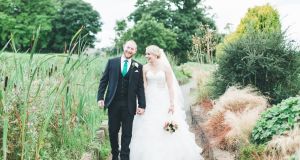 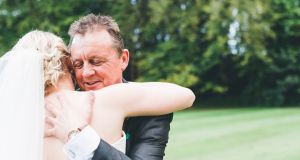 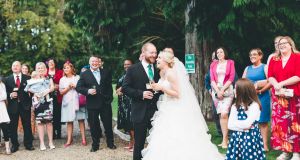 After travelling to Australia Conor, a security guard from Co Wexford, met Kate in her native Queensland on a night out in December 2008.

“My knees gave way when I saw him – ridiculous I know, but the truth – then I played it cool and avoided him for the rest of the night,” remembered Kate, a manager at Club Beenleigh on the Gold Coast.

Conor proposed on the beach one cold and rainy night in Australia and the couple married in a humanist ceremony – one of the readings featured the wisdom of Bob Marley – at Faithlegg House, Waterford on August 24th, 2015.

Asked for a highlight of the day, Kate chooses the couple’s ‘secret meeting’ before they walked down the aisle. “We had a wall between us so we didn’t see each other, but we held hands and spoke.”

Conor’s parents, Anne and Brian, organised the flowers while the bride’s parents Sue and Alistair took care of the candles for the ceremony.

Her sister Vicki created “Our Story” and the groom’s sister Clodagh, also the maid of honour, had personalised napkins and M&Ms made. The newlyweds’ first dance was to Flowers in the Window by Travis and Kate danced with her father to Paul Simon’s Father and Daughter.

“Above all, I think the dancing was the best,” says the bride. “The ladies started on the Macarena, people had to dodge my dress, I slipped over twice, landed on my back and just lay there laughing until someone helped me up. The trad session started with Galway Girl, and naturally the Aussies had their turn with good old Jimmy Barnes’ Khe Sanh … it was the most fun I think I’ve ever had.”