Olivia O’Leary: He said, ‘Is Olivia the only woman here? Okay boys, when’s the gang-bang?’

The broadcaster talks sexism, ageism and Golfgate on The Irish Times Big Night In 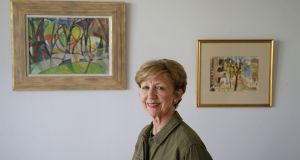 Olivia O’Leary: ‘A little part of me has begun to stop being a journalist.’ Photograph: Nick Bradshaw

Journalist and broadcaster Olivia O’Leary isn’t known for holding back her forthright opinions, and on the final event of The Irish Times Big Night In she didn’t disappoint.

O’Leary’s hour-long conversation with Irish Times journalist and host of the Women’s Podcast Róisín Ingle covered many bases, from writing a speech for the Queen in 2011, to feminism and the internet’s role in the “battering” of journalism.

On this year’s Golfgate event, which saw a number of past and present members of the Oireachtas attend a Golf Society dinner during lockdown, O’Leary says that, had she covered the event in her much-loved radio column on RTÉ’s Drivetime, she would kicked things off by saying “Ah lads”.

“Because there were an awful lot of lads involved,” O’Leary observed. “They’ve been playing golf and were all in great form or whatever, but didn’t someone stop and say, ‘it’s 50 people in a room?’ Had there been more women TDs or parliamentarians there, they would have maybe stopped [attendees] at the door and said, ‘hang on here’.

“It was an indication, I’m afraid, that the rules don’t apply to us. I’m not using the word ‘arrogant’, but there were an awful lot of people there that I know. They’re not arrogant people – they just got caught up in the moment.”

Still, many of Golfgate’s attendees have failed to apologise meaningfully or effectively.

“There’s a lot of ‘never apologise, never explain’,” O’Leary noted. “When there was that row over the party and RTÉ (in which a number of staff members flouted social distancing rules at an impromptu retirement party), the presenters all came out immediately and said, ‘listen, we were eejits’. And you know, an immediate apology which is done really full-heartedly will do an awful lot to mend. It may be something in that male psyche – never admit you did anything wrong and people eventually will forget.”

Like many, O’Leary missed “the champagne of other people” in lockdown, living in Graiguenamanagh in Carlow with her daughter Emily.

In July, she left RTÉ’s Drivetime show, where she had been delivering insightful radio essays for 18 years.

On which, O’Leary reveals: “They were changing the programme [format]. During the summer, I had begun to think, ‘do I want to keep doing this? Maybe it’s time to me to start doing something new. I’m 71, so whatever I’m going to do, I’d better do it now before it’s too late. I’m aware that everything comes to an end, and you accept it and move on and take the chance to do something else. There’s a little part of me that has maybe begun to stop being a journalist and that’s quite a change.

“I remember covering the general election [in 2011] and one or two of the politicians saying, ‘are you not a bit old for this business?’ I did go home and think, ‘gosh, I wonder are they right?’”

In addition to discussing ageism, O’Leary also recounted a moment of sexism during an outing with RTÉ’s Golf Society.

“We all stopped for a coffee and were sitting around, and there was one journalist with us, not an RTÉ person, but he turned around to the others and said, ‘is Olivia the only woman here?’. I said, ‘yeah’. And he said, ‘okay boys, when is the gang-bang?’ Even the men who were there were embarrassed by this. I passed it off, finished my coffee and went on, but it was said with such malice. I remember thinking, ‘do people really think like that?’ As far as this guy was concerned, you’re just another sexual object.”

On whether O’Leary herself might consider a move into politics, she admitted: “I was asked [to consider] once or twice or thrice. In politics, you can’t say what you want to say – there’s a notion of being gagged — and I couldn’t bear that. I would not have been able to toe the line, and often in politics that’s what you have to do. I would have also found it very hard to be in public all the time, to have my private life in public and my family in public all the time. That wasn’t a price I wanted to pay.”

The Big Night In was a series of online Irish Times events created in association with the Women’s Podcast and sponsored by Green & Blacks. irish