Una Mullally: What men could do about Harvey Weinstein 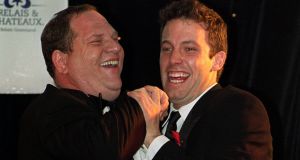 Harvey Weinstein (left) with Ben Affleck in 1999 at an event benefiting the American Foundation for AIDS Research at the Cannes Film Festival. Affleck said reading the rape allegations against Weinstein made him “sick”. Neil Munns/PA Wire

For women, Harvey Weinstein’s actions are a representation of what we know and have experienced. A woman’s existence in the world seems to necessitate the development of an inbuilt alarm that sounds when potential creepiness is detected.

I wonder if the necessities of this alarm have caused evolution to hone it so astutely? To sound it when you can sense someone behind you at night before you even hear them, when someone sits that bit too closely on the train even though there are plenty of empty seats, or the moment you realise that “no” isn’t going to work as an answer?

This is in women’s nature. When it comes to detecting creepiness, we are elephants rushing to high ground when the tsunami is hours away after feeling the reverberations from the earth through the soles of our feet. We are meerkats whose senses prick before we even know what intruder has breached our open-air environment. We are an actor in a hotel lobby whose pulse starts to beat faster when Weinstein’s female colleague leaves the meeting and we are alone with him. We learn this as young girls, after the first guy flashes us and leaves us confused. After the first guy gropes us on the bus, the alarm sets.

It is crucial that men understand we move through the world in completely different ways to them. I understand how men might baulk at the fears I’ve detailed above, or see them as overreactions, because it is a painful thing to examine oneself and one’s world, and it is far easier to take offence than to listen. It is uncomfortable to be identified as a demographic of which a part does horrible things. We know it’s not all men, but we know it’s also far, far too many.

What is useful, is that the conversation about men in power using that power as leverage to assault women, moves beyond one film executive. We personalise issues in order to discuss them, and that’s human nature too: putting a face to a problem. The broader issues themselves are harder to deal with in abstract.

Yet I am always flabbergasted by those who want to drown out the sound of women raising these issues, or who deny the existence of such issues, or who attack women who publicise them. This reaction is very obviously based in a deep rooted fear of having one’s power and privilege unseated, yet it is given airtime as though it is a rational point of view, or a “side” to a “debate”.

Oftentimes, highlighting these issues is contested with issues faced by men – mental health issues, suicide statistics, paternity rights, and so on – as a diversionary tactic. If I am talking about something and you immediately want to talk about something else, then I can deduce that you don’t want to hear what I’m saying. Ironically, these terrible issues facing men are also feminist issues. The fight for gender parity in parenting and childcare, as well as the deconstruction of the psychological pressure and gendered expectations society places on men, are issues feminists fight for. We should fight together.

While the details of the Weinstein scandal are horrifying, perhaps what it is unearthing is a positive moment in this never-ending conversation about men assaulting women. It provides us with concrete examples of the ambient sleaze that sometimes verges on or escalates to abuse, harassment, or violence. The examples of Weinstein’s victims in this case are especially useful because they relate to famous people, faces of a problem.

What is heartbreaking, is thinking of all the women who were subjected to the terror of men such as Weinstein in the film industry, just because they wanted to fulfil their dreams and act. How many thousands were raped and assaulted over the years as part of a casting couch culture where bullish guys did what they wanted with the women presented to them? Talents became targets. But you don’t have to be a budding movie star to recognise the sentiment or situation.

As usual, when it comes to examining the poor behaviour of a guy in power, women called it out, and gradually, some men followed. Even though the circumstances are grim, hearing famous men commit to the basic politeness and obviousness of speaking out against women being assaulted is heartening. This epidemic can only be solved by men themselves. There can be no shock about what women endure as long as many men simply don’t and won’t listen to women’s experiences. When things get difficult to confront, we would all much rather look away, but hopefully Weinstein’s alleged crimes will create a space for this conversation to get real and get louder, no matter who doesn’t want to hear it.