Ice swimmer Nuala Moore is in the running to be crowned world open water swimming woman of the year – but her greatest victories are won inside her own head, the Dingle woman tells Gary Quinn 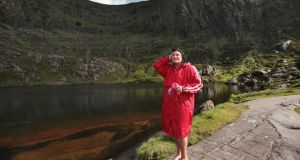 Warming up: Extreme swimmer, Nuala Moore, on Pedlar’s Coom, Conor Pass, on the Dingle Peninsula where she trains daily in the lake enclosed in the mountain. Photograph: Valerie O’Sullivan 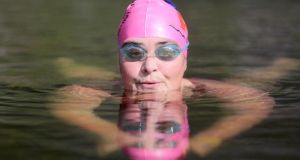 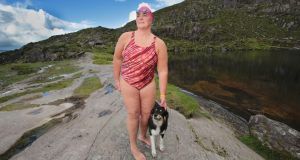 There’s a gentleness in how Nuala Moore talks about her sport that hides the strength needed for it. She speaks poetically, using phrases that may come from her home place of Dingle in Co Kerry, or it could be from the language that comes naturally to those who speak Irish and English.

Describing her love of the sea over lake swimming she talks of her difficulty in finding “the pulse of the water – there’s no heartbeat in the lake”; on the challenge of ice swimming she describes building her courage as “everything is as life allows”; and of managing anxiety she explains that “you can’t swim the fears of tomorrow”.

As we discuss her life at sea she bats away any idea that she is courageous, but her tales are thrilling nonetheless.

In 1996 she swam the 1,300km-plus route around Ireland in 56 days in a team of six. It w as one of the most humbling experiences in her life, she says, a task that required her to break it down “arm over arm. You have to break the world down, and all your problems. It’s a mental challenge as much as anything else”.

One of the hardest days, she says, was coming into Dingle Bay knowing that she would have to leave again and continue on.

The seas around Ireland offer some of the most challenging and varied swimming in the world, from the volatile strength of the west-coast Atlantic to the cold of the north. She believes completely in team work and calls herself a “control freak” as regards planning.

In 2008 she took on a double crossing of the English Channel, describing reaching France and immediately turning around again for the return as a “supreme feeling”.

In 2011, she turned to the ice mile, swum in water of less than five degrees.

Training with another Irish world open water swimming champion, Anne Marie Ward, she was thwarted by a lack of cold weather until, as she writes on her blog: “It was fantastic when 2013 started with a chill and temperatures dropped enough to achieve it.”

ICE SWIM from Sean Mac an tSithigh on Vimeo.

She took to Pedlar’s Lake on the Conor Pass at Dingle, a deep dark lake that offered up a water temperature of 3.9 degrees, with an wind chill of -6. She did the mile in 38 minutes, gaining membership of the International Ice Swimming Association.

With this foundation laid she was invited to Siberia, to take on 1,000 metres at zero degrees. No one knows ice swimming like the Russians, and experience counts.

She describes trying to swim in the 25m channels they cut through the ice: the air temperature was -33 degrees, the water at zero and she pulled that air deep into her lungs as the ice water gripped her body.

The sense of fear as she watched men cut the ice immediately in front of her was overwhelming, she says. She came out at 150m and realised she had a lot of thinking to do.

“With the ice you’re brought down to the edge of needing help. You bring yourself to this point and life brings you to this point. It’s a manipulation game,” she says.

She returned to the source: visiting the fish factory in Dingle, she plunged into buckets of ice and retrained.

Bolstered, she took up an invitation to Murmansk inside the Arctic Circle and fought to claim that 1,000 frozen metres and join the five other women in the world to have achieved it – from the UK, US, Russia and now Ireland.

She loves Russia, for its dedication to her sport, but also the people, their professionalism and quiet pursuit of achievement. She recently returned from another world first when she joined an international relay team of 96 people from 17 countries who swam the Bering Strait, from Russia to the US. It’s a swim of 86km in the Pacific, a body of water that drives a colossal current along its 8,500km length and 3,000km depth.

The sea is dark and cold. Its waves swell like mountains above the swimmers and the huge white hospital boat the Russian military has provided fades to nothing in the fog. Small ribs dot the water, carrying soldiers trying to keep swimmers in sight.

There are separation issues to contend with, the trailing waves that threaten to flood the small boats and temperatures as low as 2.9 degrees.

They can manage only 10-15 minutes in the water at a time.

It takes six days to reach Alaska and when they do so, this international band of pioneers walks onto the beach with all their flags flying, the Tricolour held as proudly as all the rest.

I want to understand how hard it is for the swimmers, to benchmark it against something I can measure, so I ask “is it a bit like climbing Everest?”

“Yes, I guess it is,” she says, “if you don’t have oxygen, the Sherpa’s desert you and you leave your tent at home. It’s the world stripped back, as raw as you ever could be.”

Recognition is hard-won in a sport such as this, so being nominated as world swimmer counts.

“When I was young to the world of adventure,” she says, “it frustrated me that the world wasn’t watching, that people didn’t think I was brilliant. But now my motivation is so much more. I’m free to succeed. When you get out of the water you’re brought home. There are no medals. No round of applause. The ice brings you to a place that makes you very humble.”


See more on the World Open Water Swimming Woman of the Year award
and cast your vote at dailynews.openwaterswimming.com;
See also nualamoore.com