‘When I came to Ireland, I suddenly realised maybe I was gay’

Carlos Gonzalez, from Venezuela, feels he can be 100% himself in Ireland 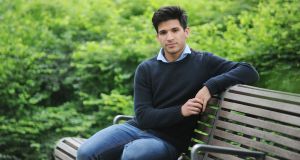 Carlos Gonzales: ‘I have a good job, I’m fulfilling my dream of dancing, I have an amazing husband and we bought a house a year ago. I couldn’t ask for more.’ Photograph: Aidan Crawley

Carlos Gonzalez was just days away from going home, after two months in Ireland, when his mother called. The Venezuelan student was looking forward to spending Christmas with his family and also planned to complete his engineering thesis in the new year. His mother jumped straight to the point as soon as he picked up the phone.

Gonzalez was aware of the unrest that had been building since the death of former president Hugo Chávez earlier that year. He had also experienced, at first hand, the lack of accountability around crime and murder in Venezuela. Just three months before coming to Ireland, he and his family were held at gunpoint in their home in the city of Valencia.

I went all the way to the airport and then said to myself, ‘No, this is not a good idea. I’ll figure things out’

Gonzalez, his sister, his mother and grandmother were tied up while three teenagers and an older man took all their belongings. No one was injured but the effects of the incident were long-lasting. “That day I was all right, I was in control but I remember going into college the next day and when I saw my friends I just started crying. I couldn’t control it then.”

Just five months on from this traumatic experience, Gonzalez found himself alone in a foreign country faced with the dilemma of not returning to Venezuela. After speaking with his mother, he learned that his language school would allow him to transfer to a 12-month course. The biggest problem, though, was his lack of money. With only €400 left, the student knew he needed to find a job straight away.

“I knew Dublin was a really expensive place, and at that point I didn’t even know how to say ‘mum’ and ‘dad’ in English. So I called my Mum and said ‘I can’t do it, I’m coming home’.”

Gonzalez packed his bag and two days later he took a bus to Dublin Airport. “I went all the way to the airport and then said to myself, ‘No, this is not a good idea. I’ll figure things out’.” He got back on a bus and made his way to Howth, his favourite place in Dublin. “I always found Howth so peaceful and beautiful, so I went there, sat down on the cliff with all my bags and started crying. It was one of the hardest decisions I’ve ever made. I had put my career not just on hold, I had thrown it in the rubbish. I was going to start again from zero.”

Gonzalez found a place to live in Rialto, sharing a house with eight others and spent the last of his money on one month’s rent. He signed up to extra free English-language classes, visited the library every day and began applying for jobs. However, with such poor English skills, he struggled to secure work. After one month, with no job, he told his Spanish and Brazilian housemates he was unable to pay rent and packed his belongings. “They were like, ‘No, you’re staying, we’ll pay your rent and you can pay us back afterwards.’ I’m so grateful to those people.”

As luck would have it, the following day he was offered a job as a porter at the CityWest Hotel. He spent three months collecting plates from outside hotel rooms and then found work as a housekeeper in a hotel in Temple Bar. He spent 18 months cleaning hotel rooms, during which time his English improved significantly. While he missed home, Gonzalez felt very comfortable in Dublin.

“The reason I wanted to go away from Venezuela in the beginning was I never fully felt like I connected with the culture there. I love my family and friends and I was passionate about my degree, but there was always something missing. In my mind I kept thinking Ireland was temporary, that I’d go back, but my mum said, ‘No, that’s going to be your home now’. And she was right.”

He met and started dating a Scottish man called Andrew. He had never dated men in Venezuela and never considered he might be gay before coming to Ireland. “I remember that even in college, if you were gay, you’d be that crazy lady boy who was really feminine. It made me think I couldn’t be gay. But when I came here, I saw two guys holding hands and people were completely normal about it. I suddenly realised maybe I was gay, that there were other pages in my life I didn’t know about.”

In 2016 he and his boyfriend were married. Shortly after, he started attending dance classes on the suggestion of a friend. He’d briefly danced ballet as a child and missed sharing salsa with his family. “On Sunday evenings we’d put music on while we were cleaning and I would dance salsa with my mum and my granny. They’re fantastic dancers and it’s always a passion I had.”

It just clicked. I realised this was what I wanted to do with my life. It felt so natural to me being on stage; dancing was natural

After attending two contemporary dance classes with Coiscéim Dance Theatre, Gonzalez was asked to take part in a show. He went on to dance with a number of different companies before auditioning for and joining the Dublin Youth Dance Company. He continued to work full time as the manager of a coffee shop but all his energy went into training and performing around the country. “It just clicked. I realised this was what I wanted to do with my life. It felt so natural to me being on stage, dancing was natural. I’ve always loved dancing and I was able to expand it here.”

His mother has visited Ireland twice but he has not seen his father or sister since 2013. He finds it painful to watch the news reports about the ongoing chaos and instability in Venezuela and worrying about loved ones at home. Earlier this year his older sister emigrated to Argentina and his mother and grandmother plan to follow. Gonzalez hopes to visit them, and meet his niece for the first time, once they’ve settled.

However, home for him is now Ireland. “I have a good job, I’m fulfilling my dream of dancing, I have an amazing husband and we bought a house a year ago. I couldn’t ask for more. Maybe that’s why I connect so easily to Ireland, because I have the freedom to be 100 per cent myself here.”