New to the Parish: Jiayi He arrived in Ireland from China (via Canada) in 2017 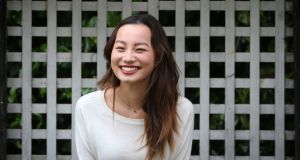 When Jiayi He applied to spend the final year of her undergraduate studies in Dublin she knew very little about Ireland. Her mother’s English teacher often spoke of how much he loved the country but the Chinese student, who had already spent a year in Canada, had no other connection to this small western European country.

“I knew that Ireland was home to Westlife and had green fields, which was enough to sell the place to me. I’m not a big fan of Westlife but they’re huge in China; everyone knows about them and their songs are played everywhere.”

Jiayi grew up in China’s Sichuan Province and moved to Beijing for university. After two years studying financial engineering in the Chinese capital, she signed up for a study-abroad programme and moved to New Brunswick in eastern Canada.

I wanted to get to know local people. That’s the reason you study abroad. If you just stick with people similar to yourself, what’s the point of going abroad?

“Canada was my first time living abroad and everything felt really new. I was placed in a university residence with 100 students and I was the only Asian person among them. It forced me to make friends and engage in society around me.”

After one year in North America, Jiayi didn’t feel ready to move back to China and applied to spend the final year of her degree at University College Dublin. “I felt there was still a lot to see outside my own country and I wanted to stay abroad for longer and explore more cultures.”

She arrived in Dublin in September 2017, a city she describes as “green” with “fresh, clean air”. Eager to meet Irish students at the university, she joined a language exchange programme where she spent time with young people trying to improve their Mandarin skills.

“I made lots of Chinese friends but I wanted to get to know local people. That’s the reason you study abroad. If you just stick with people similar to yourself, what’s the point of going abroad? Making local friends means you understand a place better.”

Jiayi quickly settled into her new Irish home and was reluctant to leave when she was offered a position at the United Nations’ Asia-Pacific headquarters in Bangkok after graduation. She had recently started dating a young Irish man called Chris and felt a strong connection to Dublin.

“I hadn’t expected to be offered the UN position but it was a really good opportunity and I didn’t want to turn it down.” Fortunately, Jiayi’s boyfriend was already planning on taking a gap year after college and decided to join her in Thailand.

Chris quickly got involved in the Bangkok GAA scene and encouraged Jiayi to get involved. “I’d never played soccer before but it wasn’t a professional team, people were more there for the craic. It wasn’t just Irish people; there were Canadians, Americans and Australians as well.

“People were always interested in why I was playing; you don’t see many Asian people playing Gaelic football. But it was really fun and playing GAA I felt more immersed into the Irish expat community. Strangely enough I began to feel an even closer connection to Ireland than I had when I was living here.”

When her year-long contract with the UN finished, Jiayi decided to return to Ireland to do a master’s in Business Analytics at UCD’s Smurfit School.

“I had an emotional attachment to Ireland but I also knew I wanted to work in data analytics, and Dublin is recognised as the tech hub of Europe. There were lots of job opportunities in Ireland.”

Jiayi arrived back on Irish soil in September 2019 and moved into UCD campus accommodation. Aside from her regular master’s classes, she also signed up for an Irish language course in the university.

“It’s a complicated language to learn but I loved my teacher and she was really patient with us. It saddens me that whenever I tell Irish people I’m learning Irish they seem eager to stress to me that it’s pointless and that nobody speaks the language. But I think it would be such a shame if Ireland were to lose its beautiful native tongue. In my native province in China, we are so proud of our local dialect and endeavour to continue speaking it even though we all use Mandarin in academic and professional life.”

Two months ago, UCD closed down its campus and Jiayi moved to Naas in Kildare to stay with her boyfriend’s family during the Covid-19 pandemic. She misses her friends in Dublin but enjoys the flexibility of being able to make her own schedule while studying remotely.

I remain optimistic about how Ireland will recover from this crisis. Look how far Ireland has come over the past 50 years

“I love it here; I love the tiny shops and cafés and the people here are very friendly. Before I moved to Naas I’d only really seen the city side of Ireland but now I can understand the other side and really feel like I’m part of a community.”

Jiayi says she’s noticed many of similarities between Irish and Chinese people during her time here. “Chinese people and Irish people are very focused on family and there’s also tiny life habits that are similar that I didn’t see in Canada.”

Jiayi regularly speaks to her parents back in China but says she feels a sense of calm being in Kildare during the pandemic. “I feel like part of the family here. After lockdown I will go back to China to visit but then I’ll come back here.”

She is hopeful that job opportunities will still be available in technology once the worst of the pandemic has passed but has also heard that international students often struggle to secure work here.

“I’ve learned that in one of the world’s most educated countries, a master’s degree is far from an automatic passport to a job. But I remain optimistic about how Ireland will recover from this crisis. Look how far Ireland has come over the past 50 years. Like China, this is a resilient country that always finds a way to bounce back from difficult times.”

Jiayi is happy here for now but in the longer term she’d like to find work that would allow her to split her time between China and Ireland. “In this increasingly digital world we live in, I like to think that we won’t be so tied down to one particular place. I now have two home countries and I’m fiercely proud of both of them.”

The dark attic lit up by a little interior inspiration
7