My Obituary: Fearghal O’Nuallain, an Irish explorer who cycled the globe

A series in which people help to pen their own obituaries: ‘O’Nuallain was a trained chef who got out of the kitchen, and a dyslexic geography teacher who discovered the world’ 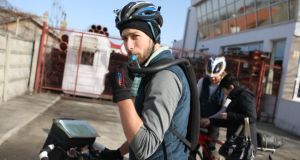 Fearghal O’Nuallain: ‘He understood from an early age that his time here was finite and he wanted to do and have as much as he could,’ said a close friend

Louis Armstrong’s voice warmed the chill of a damp November morning in St Kilian’s Church, Greystones, as the assembled bowed their heads for the funeral of Fearghal O’Nuallain. The original recording of What a Wonderful World played on a gramophone to a full church.

“The lyrics embodied what Fearghal lived for,” said his sister Áine.

On his travels, O’Nuallain was fortunate enough to see “skies of blue and clouds of white” in deserts, on mountain tops, in jungles and in slums. As a geography teacher, speaker and writer, he used his journeys to inspire people to engage with the world. He believed passionately in the importance of first-hand experience, in recognising good and bad, light and dark, and his life had many, as the lyrics said, “bright, blessed days and dark, sacred nights”.

O’Nuallain wrestled with depression at several points in his life, and he did his best to find the sacred in his dark nights.

Friends described him as dry-witted, irrepressibly curious and annoyingly critical. He had “a low threshold for bullshit” and disdained self-grandeur in others. A close friend said: “Fearghal’s world was wonderfully complex, wonderfully contradictory and wonderfully funny. He dies a rich man, rich in experience, but Fearghal’s greatest struggle was that he understood from an early age that his time here was finite and he wanted to do and have as much as he could.”

Past pupils paid tribute to O’Nuallain: “He always made us question . . . You could tell that he really loved geography because he kept showing us films of himself travelling through faraway places.”

The priest read a simple prayer from the Book of Common Prayer, and rain fell in fat, cold drops as a simple birch coffin was lowered into the dark soil of Blacklion Cemetery in the foothills of Bray Head. Refreshments were served afterwards in the Beach House restaurant; Black Velvet cocktails accompanied oysters and smoked salmon.

When O’Nuallain graduated from Blackrock College he didn’t follow his classmates into medicine, law or commerce. Instead, he learned to cook, spending four years training as a chef with Derry Clarke and Paul Flynn, and at Shanahan’s on the Green. But, a former colleague noted, kitchens were too confining for him.

While working as a chef in Melbourne, he found his true calling: exploring the places that make up this world. After a night out, he woke with a thumping headache to discover he had spent all of his wages buying a touring bike and camping gear from a guy he had met in a bar. Three weeks later the bike took him to Sydney and helped him break out of the kitchen.

After turning down a job in Heston Blumenthal’s Fat Duck restaurant, he returned to Dublin to sell wine, then attended University College Cork as a mature student. There he discovered he was dyslexic, but still obtained a first-class degree in geography and economics. He celebrated by completing the first Irish circumnavigation of the globe by bike, with a childhood friend, Simon Evans.

After cycling around the world, O’Nuallain wanted to learn more about it, so he did an MSc degree in environment and development at Trinity College Dublin. A believer that the “world teaches more than books”, he walked across Rwanda to gather information for his thesis. The journey was emotionally demanding. Walking through villages where people had few material possessions but were rich in spirit and community made him question the value placed on success and progress in the West.

Groucho Marx said: “Take my advice; I’m not using it.” Before his passing, O’Nuallain said that if he could do it all again, he would have taken more of his own advice. He would have worried less about things and made more time for friends and family. His favourite writer, Antoine de Saint- Exupéry, put it best in his children’s book The Little Prince: “Now here is my secret, a very simple secret: It is only with the heart that one can see rightly; what is essential is invisible to the eye.”

Edith Piaf’s voice crackled on a 1960 recording of Je Ne Regrette Rien as the daylight dimmed over Greystones harbour and the rain beat against windows steamed up with the laughter of the crowd. All present agreed that Fearghal missed a great party.

Friends said that “unfinished” was how he’d have liked it. For he understood that life was not about ticking things off a list of extrinsic achievements. He felt that “a life should be measured by what was learned, experienced and shared, who was helped and what was passed on to others”.