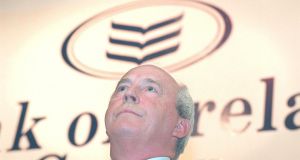 From the late 1980s, Kilroy became a much sought-after director for the boards of some of Ireland’s major companies, including Bank of Ireland, where he was governor for nine years from 1991. Photograph: Frank Miller

In his autobiography, A Life Worth Living, Michael Smurfit described his long-time colleague Howard Kilroy, who has died aged 83, as “an invaluable ally and a great friend”, and, in a message this week to The Irish Times, added that he was “without doubt, the nicest, most creative, intelligent, humorous and most loving person that I have had the privilege of meeting in my lifetime”.

Certainly, Kilroy was central to the phenomenal growth of Smurfits after joining the company as financial controller in 1973. He became financial director two years later, and in 1978 its chief operating officer, and, finally, in 1986, president of the company also, retiring from the latter two positions in 1995. During that time, what is today the Smurfit Kappa group rose to become one of the first-ever Irish multinationals, with a global significance.

Ironically, Michael Smurfit’s and Howard Kilroy’s business partnership succeeded despite sharp differences in their approaches. To borrow a phrase from Neil Simon’s famous play, they could have been described as “the odd couple” of Irish industry. As Kilroy put it in a contribution for Smurfit’s book: “I was patient and administratively sound, he was like the front end of a sonic boom. I cleared up all the debris and put it in neat piles. Sometimes, we disagreed.”

Indeed, it was Kilroy’s intervention during negotiations for the takeover of the Container Corporation of America (CCA) in 1985 that, arguably, made all the difference in what became the pivotal moment for the Smurfit group’s history. After Michael Smurfit disagreed strongly with executives from the investment bank, Morgan Stanley, who were part-financing the proposed merger, over the $35 million “administrative charge” they wanted Smurfits to pay, Kilroy took his boss outside the room where the talks were taking place, calming him down, and, crucially, persuading him to pay up. The deal was done, and, as Smurfit wrote later in his book, “effectively this was the transforming deal which made the Smurfit business”.

In his message this week, Smurfit recalled that “from memory, Howard tendered his resignation from the group probably a dozen times. When Howard actually retired, I gave him each of the letters of resignation that he had sent to me over the decades. Whatever the disagreement may have been, it never affected the bond that grew and grew between us.”

Michael’s son Tony, now CEO of Smurfit Kappa, told The Irish Times this week that another aspect of Kilroy’s style was his openness to subordinates, and his sensitivity to local cultures when the group expanded into non-English-speaking countries, ensuring local management was sourced in each case, and “direct access” to himself was given to even lowly middle managers. “He wanted people to enjoy working for the company.”

Kilroy grew up in Clontarf on Dublin’s northside in modest, middle-class circumstances. His mother, Ena (Kathleen) nee Howard, was a homemaker, his father, Percy Gibson Kilroy, a commercial traveller. Percy and his brother Desmond later started a distribution company which, in time, became part of the Smurfit group. After primary school, Howard won a scholarship to Dublin’s High School. However, despite his excellent mathematical talents, he soured of formal education and left after taking his Intermediate Certificate, starting work aged just 15. Eventually he became an articled clerk to the Dublin firm of chartered accountants, JA Kinnear and Co, qualifying in the late 1950s, by which time he had married a childhood sweetheart, Meriel McCullagh, a secretary, also from Clontarf.

Kilroy then joined the Dublin branch of Brown and Polson, a UK company which was a subsidiary of the US multinational Corn Products, a fortuitous move that saw him working for 15 years in Ireland, England and Belgium for an organisation with much more up-to-date accounting and business practices than were then usual in Ireland, skills levels which he then brought to Smurfits.

From the late 1980s, Kilroy became a much sought-after director for the boards of some of Ireland’s major companies, including Waterford Wedgewood, as chairman, CRH, Arnotts, and the Bank of Ireland, where he was governor (chairperson) for nine years from 1991. Pat Molloy, who was the bank’s CEO for much of that period, recalled this week that Kilroy came to the bank at a time when it had considerable problems, losing money in both its UK and US operations. The bank made just £15 million in profits in 1991. By 2000, this had risen to £900 million. Molloy adds that Kilroy was “a prudent, conservative banker… he would have been horrified… absolutely appalled at the way the industry developed [in the Celtic Tiger boom years, leading to the crash of 2008].”

A man of committed Christian values, Kilroy spent much of his time in retirement helping charitable and voluntary bodies, especially the World Scouting Foundation’s investment committee, of which he became chairperson. During the economic downturn in 2009, he succeeded in raising the foundation’s funds by 16 per cent in a year that saw donors’ contributions fall by almost half. In 2011, he was awarded the federation’s highest award, the Bronze Wolf Award, which was presented to him by the foundation’s life president, King Carl XVI Gustaf of Sweden. During last week’s State visit to Ireland by the Swedish royal couple, Carl Gustaf sent flowers to Kilroy’s funeral.

Kilroy was also the first chairperson from 1997, at the request of the then Church of Ireland Archbishop of Dublin, Dr Walton Empey, of the Cowper Care group of nursing homes and sheltered housing.

A keen sportsman, Kilroy loved especially rugby and sailing, and chaired the campaign in 1989 in support of the NCB Ireland round-the-globe challenge.

Howard Kilroy is survived by his widow, their children Guy, Jackie, Lauri, Sharon and Simon, and by his brothers Norman and Robert, and his sister, Carolyn. He was predeceased by two sons-in-law, Alan Ruddock, the well-known journalist, and Christopher Ager. He died a day after his 60th wedding anniversary, on which he presented his wife with a set of diamond earrings.