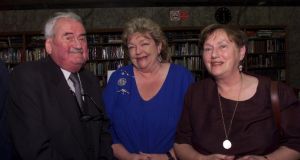 Mary Kotsonouris, flanked by Aean Macreamoinn and Maeve Binchy, at the Irish Times Literature Awards at the RDS in 1999. Photograph: Bryan O’Brien

Mary Kotsonouris (nee Raleigh), who has died recently in Dublin after a short illness, contributed significantly to Irish legal and public life. Her personal and intellectual qualities earned her wide-ranging respect and affection in the significant roles she fulfilled over many decades.

A native of Limerick, her father was John Raleigh, a builder, and her mother, Bridget Mooney, was from Offaly. She was born in Joseph Street in that city, and her academic gifts were apparent at an early age during her education in the Sacred Heart convent in Roscrea. So was her spirit of initiative and adventurousness. She went after school on a gap year to a convent school in Lucerne in Switzerland, but was involved in a car accident in Paris on her way home, in which she suffered a broken leg.

Undeterred, she completed a degree in history in UCD in 1953 and subsequently travelled widely, working for a period in the Widener Library at Harvard, and as a teacher in Switzerland, and then for student travel offices in London and Dublin. She was awarded an LLB in UCD – she was the only woman in her class – in 1965 and qualified as a solicitor in the same year. Between 1965 and 1981, she worked in a law practice in Dublin, before her appointment as a judge of the District Court in 1981.

This appointment, sometimes seen as a route to a long but essentially unspectacular career, was in her case a stepping stone to a life of professional and public service in a number of different but significant fields.

Her work included advising the Consumers’ Association of Ireland, acting as an adviser to the TV programme Murphy’s Law

Her resignation from the bench in 1990 – a decision as rare then as it would still be today – was merely the prelude to a sequence of notable appointments.

In 1994 she served as chairperson of the Sentence Review Group, advising the minister for justice in relation to prisoners serving long-term sentences. In 1995-96 she was appointed as the first regulator of the premium rate telephone service, serving again on that body in 2003. In 1997 she was appointed to the expert group charged with making recommendations for the establishment of the prison service. Her work included advising the Consumers’ Association of Ireland, acting as an adviser to the TV programme Murphy’s Law.

She returned to higher education, completing an M Litt at Trinity College in 1992. She published Retreat from Revolution, dealing with the early years of the post-revolutionary period, in 1994, and her substantial research in legal history – including Brehon Law and the Dáil courts – featured in her contribution to the RTÉ Thomas Davis radio series We the People, broadcast in 1994.

Her degree thesis was the basis for her later book, The Winding Up of the Dáil Courts 1922-1925: An Obvious Duty (2004), which is generally regarded as the standard work on the topic. Its second edition was published as recently as last year.

A later book, ‘Tis All Lies, Your Worship...’: Tales from the District Court, (2011), included many accounts of cases and personalities from the district courts in which she served, and was a rich tapestry of strands of Irish public and private life that have generally been depicted only in fictional form.

Not merely anecdotal, its structure and content revealed as much about her own compassionate and skilful interpretation of the law as about the many-stranded life of the courts. In it, she quoted Balzac to some effect: “The ordinariness of people’s lives can be no measure of the courage which it takes to live them.” This memoir was described by Prof Gearóid Ó Tuathaigh as written with wit and elegance by a wise observer of the human condition and was dedicated to her children and to her close friend of many years, Maeve Binchy.

She was pre-deceased by her daughter Bridget, who died in infancy, and is survived by her children Vassily and Anna, her sisters Peggy, Sheila (Reynolds) and Oona (Lenihan), by her brother John, and by many nieces, nephews and friends.