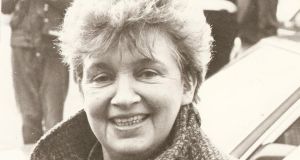 The life of Margaret Patricia (Patsy) Harrold, who has died aged 83, very much mirrored the writings of her fellow Limerick natives Frank McCourt and Kate O’Brien, with their themes of poverty and female emancipation.

Left behind by her parents James Sheahan and Sally McGowan when they emigrated to the US, Harrold was raised by her grandparents Michael and Anne McGowan from the age of three months. The family lived at Doyle’s Cottages, off William Street, in difficult circumstances.

She never saw her father again and met her mother, effectively for the first time, at the age of 30 when McGowan could at last afford to return to the city on a visit.

She completed her secondary education with the help of a scholarship to St Mary’s Girls’ School and then joined the Revenue Commissioners in Dublin. There she met Fintan Harrold, a tax inspector, also from Limerick. They married in 1954 and the couple returned to their native city in 1957.

Harrold then renewed an earlier interest in drama with the College Players, an amateur group with whom she had acted in her teens alongside a young Richard Harris, appearing memorably in a 1965 production of Brendan Behan’s The Hostage in the role of a prostitute. (Later, in the 1980s, Harrold and her daughter Ellen helped to run the restaurant at the Belltable Theatre. )

Tuairim
During the late 1960s, in an initiative originally taken by the Tuairim group, she ran poetry evenings at King John’s Castle with others including Michael Hartnett and Desmond O’Grady.

In 1974, at the request of another close friend, the Knight of Glin, Desmond FitGerald, she assisted a BBC TV crew in making documentary about the visit to Limerick of British writer Robert Graves. Another interest was her membership of the Thomond Historical and Archaeological Society (THAS), at one of whose meetings she met Jim Kemmy, who was to become her partner after the death of her husband in 1976.

After Kemmy’s election to Limerick Corporation in 1974, and his subsequent appointment as chairman of the city’s National Monuments Committee, Harrold was nominated to serve on it by the THAS and did so for several years.

She would later contribute several articles to The Old Limerick Journal, edited by Kemmy. One of her articles dealt presciently with the treatment of the women of the Magdalene laundries.

This reflected a vein of anti-clerical radicalism in Harrold that went back to the late 1940s and her experiences of seeing a much-loved cousin die in what she saw as the cruel care of nuns at St Camillus’s Hospital.

During the 1970s, she worked for two years as a volunteer at the first Irish Family Planning Clinic in Limerick, smuggling contraceptives down from Northern Ireland when they could not be bought over the counter here.

Later she became, with Kemmy, a staunch supporter of the Limerick School Project, the city’s first non-denominational school.

Speaking of this, city councillor Tom Shortt observed that “in the 1970s and ’80s, to stand against conservative Limerick publicly was a very difficult thing to do”.

Crucial role
Harrold also played a crucial role in her support for Kemmy, who moved in with her in the early 1980s. Tom Shortt remarked at the time that, with Kemmy’s “phenomenal” work rate, especially during his time as lord mayor of Limerick (twice in the early 1990s), and as chairman of the parliamentary Labour Party during the same period, “she gave him a domestic stability which allowed him to do all of this” up until his death in 1997.

In a tribute, Limerick Labour deputy and Housing Minister Jan O’Sullivan said: “I think the most striking thing about Patsy was her open, curious intelligent mind; she grew up in a very restricted Ireland and her political motivation was to change that . . .

“She had no time for the notion that the class you were born into should define what you did with your life.”

A long-time student of history and language, Harrold finally graduated from Mary Immaculate College in 2000 with a BA, the oldest person to do so, receiving at her conferring a standing ovation.

She is survived by five of her six children, Seamus, Elizabeth, Ellen, Fintan and Patrick, and by grandchildren. She was predeceased by her son Michael.