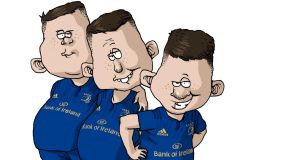 The critics who doubted whether I could make a success of home-schooling my children would be eating their words if they could see us now.

We’re sitting at the kitchen table – we’re talking me on one side, we’re talking Brian, Johnny and Leo on the other – and I’m teaching them the Countries of the World of which there seems to be loads, by the way, some of them with the most random names.

Anyway, I’m holding up a series of cords that Sorcha bought with the map of a country on the front of each, then the name of the country on the back. And I’m going, “Okay, goys, what one is this? Johnny, this is a nice, easy one to get the ball rolling.”

And I’m like, “No, we did the Letters of the Alphabet yesterday, Johnny. Now, we’re doing the Countries of the pretty much World. Come on, it’s the one that’s shaped like a boot.”

Look, I’m not saying I’ve got a future Young Scientist of the Year on my hands here. But I’m actually loving the feeling of passing on to my children all the knowledge I have in my, I suppose, mind? I’ve often felt that teaching was what I was born to do.

Okay, I’ll put it to you another way

“No, we did Teams of the Pro14 the day before yesterday. Come on, this is one of the easy ones. Shaped like a boot, look.”

“Okay, you’re going to kick yourselves for not knowing it. It’s Spain.”

And that’s when Sorcha walks into the kitchen.

“Oh my God,” she goes, “look at you with them! They’re hanging on your every word!”

“Not to undermine you in front of the boys, but the country that’s shaped like a boot is Italy.”

“That’s not what it says here, Sorcha. Oh, hang on, I’ve got two cords stuck together. I made them pancakes with maple syrup for their lunch. Yeah, no, Italy – you’re actually right. So why do they call Spain the boot then?”

“They don’t call Spain the boot.”

It’s then that Sorcha storts looking at Leo in a suddenly strange way. “Oh my God,” she goes, “have you seen the way he’s looking at the cord, Ross?”

Yeah, no, he’s taken the map of Italy from me and he’s shouting, “HELLO, FOCKING SPAIN!” at it.

“He’s sort of half-closing one eye to see it properly,” she goes.

“Yeah, no, I’ve seen him do that loads of times. Hey, whatever works for him – that’d be my attitude.”

“Oh my God, my mom said it to me weeks ago. She noticed it when she took them to see Dumbo.”

And then Sorcha says the words that every rugby father dreads.

She goes, “I think our son needs glasses.”

I’m there, “He’s not getting glasses,” refusing to even entertain the idea.

“Ross, one of his eyes is clearly weaker than the other. That’s why he keeps closing it when he’s trying to, like, focus on something?”

“Well, he can carry on closing one eye. I don’t see what the problem is. And I’m saying that as his teacher.”

“I’d rather a son with a turn in his eye than a son who wears glasses.”

“Oh my God, are you listening to yourself?”

“You made his life a misery at school.”

“Birds don’t make passes – at boys who wear glasses. That’s what they used to say to him.”

“That’s what you used to say to him.”

“I still do. Because he’s still single. Which goes to prove my point. Still single and staring down the barrel of 40. Is that the future you want for our son?”

I think we have our answer, Sorcha. Now, if you don’t mind, I have a class to teach

“Okay, I’ll put it to you another way. When I was, like, five years old, I used to do exactly the same thing as Leo except with both eyes? As in, I couldn’t focus on the words. One of the teachers in Constance Markievicz National School sent for my old dear and told her. Do you know what my old dear said? I’ll never forget this. She said that glasses were a sign of weakness. Word for word, Sorcha.”

“Sorry, what exactly is that story proving? You couldn’t read and write until you were 14 years old.”

“But I could still find the sweet spot from the sideline, 50 yords from goal.”

She just shakes her head and goes, “This is about rugby, isn’t it?”

I’m there, “Everything is about rugby, Sorcha,” and even though I don’t know what I mean by that, I love the way it sounds coming out of my mouth.

She’s like, “You don’t want him to wear glasses in case it stops him playing rugby.”

“I’m scared that if he wears glasses he’ll be labelled as a nerd.”

“HELLO, FOCKING SPAIN!” he shouts again at the cord.

“Ross,” Sorcha goes, “what’s more important to you – your son’s eyesight or his rugby career?”

If she’s expecting a quick response, she doesn’t get one.

She goes, “I can’t believe you just said that.”

“Look,” I go, “why don’t we just ask Leo if he thinks he needs glasses. I mean, there’s no better judge. Leo, how would you like to have to wear glasses for the rest of your life – like my friend, Fionn? Gogglebox Ireland, as I call him.”

I’m there, “I think we have our answer, Sorcha. Now, if you don’t mind, I have a class to teach.”

But, as is usually the case, I end up being overruled. Sorcha goes, “Leo, come with me. We’re going to the opthamologist,” which is an optician for middle class people. “We’re going to get you some lovely glasses.”