Kate Holmquist: The world needs cranky old cows like me

I am cranky. I am 58. I am demanding. And you should all be grateful 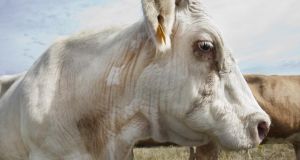 ‘We cows are needed.’ Photograph: Thinkstock

I’m not quite sure how it happened, but one day I was a yummy mummy and the next I had become a cranky old woman. Friends my age have become cranky old women too.

Let me tell you about my friend. It started with a baguette. You go to a charming rural village in France and expect not to get Cuisine de France, right? There’s nothing wrong with Cuisine de France, but what you want is a crusty-on the-outside, fluffy-on-the-inside proper boulangerie baguette, still slightly warm so that the butter melts on it slightly. The kind made from a recipe handed down from generation to generation.

My friend becomes obsessed with the baguette: why is there nowhere in this otherwise beautiful little village to get anything other than the mass-produced kind? She drags her family of grown children from one end of the village to the other, morning after morning, in search of this perfect baguette. Not sourdough. Not supermarket. A boulangerie baguette baked in a traditional oven.

But there are no real baguettes to be had. It is becoming apparent to my friend that the collapse of French civilisation is under way. Defeated, on her last day in the village she collapses into a cafe with a face sourer than sourdough and almost doesn’t bother to ask for baguette.

The French woman who owns the cafe overhears her tirade about being baguetteless and says, in an international language only women of a certain age know, “Baguette? Bien sûr. Un moment.” Hope glimmers in my friend’s previously grumpy face.

Five minutes later the French woman returns with proper, real, gorgeous, French baguettes, warm from the oven. Alongside them are jars of jam with spoons in them and half a pound of freshly churned butter. My friend is saved, redeemed and justified. French civilisation has not quite collapsed yet.

May I speak to your manager?

I will not sit in draughts in restaurants. I will send back food if it’s inadequate. I will query the bill. I will complain. “May-I-speak-to-your-manager?” is my middle name.

I will protest when shoes don’t fit. It’s not my fallen arches that are the problem: they make shoes too narrow these days.

I have to resist giving unsolicited advice, such as “I hope you have put sunscreen on that child” and “how dare you leave your dog poop on my stoop”.

I have developed a sensitivity to noxious scents, rowdy young people partying after midnight and eggs that are not perfectly poached. I cannot understand why people working in supermarkets won’t help you pack your bags any more, or why, when you stare down young men on the train, they won’t give up their seats.

I am utterly, totally in charge. I deserve it after doing everything for everyone else all these years. Finally, I’ve got it. I understand cowdom.

As a younger woman working as a waitress, I would wonder why women of a certain age became obnoxious. What was wrong in their heads that made them that way? Was it sexual frustration or pure snobbishness? Two olives in the martini, not one. Only use Stoli. Is that a paper napkin? Is the fish fresh? I mean, really fresh? Because you know, that’s impossible. You can’t get fresh tuna this time of year.

As a young journalist, often tasked with dealing with eccentric complaints, I would politely listen while thinking that someone had a screw loose somewhere. Had they nothing better to do than complain to a newspaper?

Now I’m that eccentric. I have every right to express my opinion and butt in, whether I’m wanted or not.

Now that I have become that cow of a woman, I realise that it’s not sexual frustration or snobbishness that has one asserting oneself about seemingly petty affairs. Someone has to maintain standards and show the young how things are meant to be done.

I am a cow and proud of it. I may even organise a Cow Pride Parade in my local village or start a Cow Pride political party.

We cows have a purpose. We are the reason that in little French villages there are still people bothering to bake proper baguettes.