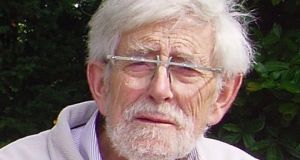 Born on September 20th, 1928, he attended the local schools in Ballymote, Co Sligo, before coming to University College Dublin in Earlsfort Terrace. He qualified from the School of Architecture in 1951, when he was president of the Students’ Council. He met his beloved Mary who qualified in 1952, and they were married in 1953, raising their family in Enniskerry, Co Wicklow. John worked in the Office of Public Works before setting up his own practice.

In 1973, Ireland joined the European Economic Community along with the United Kingdom and Denmark. Membership brought with it participation in the Comité de Liaison des Architectes de l’Europe Unie (CLAEU), which was the precursor of the Architects Council of Europe. During John’s presidency of the RIAI, he attended meetings of the CLAEU Board. The board made it clear that the RIAI could not represent Irish architects in Europe as it was, in its view, a subsidiary of the RIBA; indeed, one of the by-laws of the RIBA was that “The President for the time being of RIAI was automatically a Council Member of RIBA”. John set an agenda for respectful disengagement from the RIBA, which took the two years of his presidency to come to fruition and a further 12 months for approval from Her Majesty’s Privy Council. He skilfully handled the relationships with the Royal Society of Ulster Architects and the Royal Incorporation of Architects of Scotland, gaining their support for the changes. This was the fruit of John’s persuasive powers, once described by a colleague as an ability to “persuade us all to walk out of an upper floor window!”

This reflected the inclusiveness that was a hallmark of John’s life.

That inclusiveness extended to a younger generation of architects for whom he made the RIAI a very welcoming place.

As a practising architect, his best known work is the Swan Centre in Rathmines, Dublin. This is an urban development that is still part of the community of Rathmines. It was a leader in the concept of mixed development, with its shopping, cinemas, restaurants and housing. Completed in 1984, it was renewed in 2015. It has stood the test of time as an appropriate form of development for Dublin’s suburbs.

Never really considering himself as a Dubliner, he spent his early years in Ballymote, Co Sligo and his latter years in Enniskerry, Co Wicklow.

In Enniskerry, he and Mary created a wonderful garden, the location for many pleasant afternoons supporting charities, which John and Mary helped. One close to their hearts was the Irish Architects Benevolent Society, to which he contributed over many years with Mary, who was the honorary treasurer for many years.

John was gifted with a thirst for knowledge of a breadth beyond his needs. He was always understated, caring and giving, and was supportive to all those whose lives he touched, without any fanfare. His spirituality was similarly carried with a grace that was very private.

He is survived by Mary (née Gardiner), his children Niall, Maurice, Stephen, Máire and Kevin, and his 14 grandchildren.