Leading psychiatrist who helped and inspired many 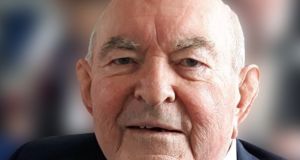 Dr John G Cooney: devoted his life to the care of others

Dr John G Cooney, a leading psychiatrist and former medical director of the Daughters of Charity and associate medical director of St Patrick’s Hospital, Dublin, died peacefully after a short illness in Blackrock Clinic on January 8th, 2018. He was born in Longford in 1926, the eldest of eight children of Dr Mark and Margaret Cooney. He received his secondary education at Castleknock College, where he excelled academically and in sport, being a member of a Leinster Schools Rugby Cup winning team of 1944 and also playing for Leinster Schools.

He studied medicine at University College Dublin, gaining his rugby colours and playing with the Mater hospital’s cup team. After graduating he took up general practice in 1952 in Blanchardstown. His practice rapidly expanded and soon included medical care of the intellectually disabled girls and young women in the care of the Daughters of Charity in Glenmaroon House, becoming medical director of their houses, including St Vincent’s on Navan Road. As well as medical director to the order, he became its advisor, confidante, and representative at the Department of Health. He co-founded the Parents and Friends of Intellectually Disabled Association. This work led to interest in psychiatry and he concurrently took up training in St Patrick’s Hospital under the doyen of Irish psychiatry, Norman Moore. He studied in Birmingham for the diploma in psychiatric medicine and on his return was asked by Prof Moore to address the problems of patients with alcohol addiction: as a consequence he developed the alcohol programme in St Patrick’s.

At this time St Patrick’s was becoming a large multidisciplinary unit with acute assessment and treatment providing for in-patients and with a clear aftercare pathway for follow-up rehabilitation. He was closely involved in these developments and became an international authority on alcoholism, culminating in the publication of his practical and influential book Under the Weather.

As a person of strong faith, John greatly admired the work of the Daughters of Charity and considered their work to be underappreciated. In his memoir A Lifetime with the Daughters, he wrote of his 60 years working with them while honouring them for their heroic work for over 100 years.

In 1984 he was conferred with the knighthood of St Gregory in recognition of his years of service with the intellectually disabled. His active work with the order continued for the rest of his life as a founder member of the St Francis Hospice in Raheny and in Blanchardstown, Co Dublin. He also served on numerous boards and committees over the years, including the National Association for Mentally Handicapped of Ireland, the National Rehabilitation Board, St Luke’s, St Anne’s Hospital, Castleknock College and the Whitaker Committee of Inquiry into the Penal System.

His avocations in life were art and sports, and most of all a devotion to his family, including his extended family. He had a wide circle of friends.

His love of art fostered a strong belief that visual art can influence the health and wellbeing of patients and staff. He developed an art collection in St Patrick’s Hospital and subsequently in St Luke’s Hospital: these collections are a testament to his vision and prodigious industry. St Patrick’s was the first hospital in the country to establish such a collection.

After the death of his first wife, Dr Patricia Huggard, in 2006, John married Dr Anne McKenna. He is survived by his wife Anne and his six children, Leonora, Mark, Susan, Rachel, John and Patricia, two brothers Patrick and Garrett and two sisters Agnes and Gemma.

John Cooney devoted his life to the care of others, a task he discharged with great compassion.

His wisdom and insights will be keenly missed by all those who had the good fortune to share his friendship.

From Myanmar to Moyard for couple on magic carpet mission
10