Family Fortunes: ‘I wouldn’t be a man at all if I let anyone pick a wife for me’ 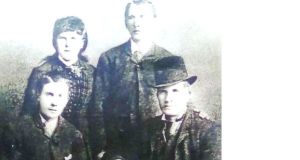 I loved my grandad. We lived in Waterford and he lived in Tralee so we only met at holiday times. He would take me for long walks talking about Kerry football. I hadn’t a clue what he was talking about but I listened to him and then one day he mentioned that he had walked miles to hear Parnell. “Is that the man we learn about in school?” Grandad smiled. “A great man.”

I was grown up and Grandad was dead when I heard this story. He lived on a farm outside Tralee and he was the eldest son. He had one brother called Tom and a sister called Katy. As the eldest son, he would inherit the farm.

Well so, you can leave tomorrow without a penny and never come back

But one day his father called him. “You’re getting married next Sunday to Mary Kelly from out Banna way.” That was as far as he got. “I will not get married to anyone next Sunday.” His father shouted “You will, you pup. She has a fortune and we need the money for a dowry for your sister. Don’t give me that lip. It’s all arranged.”

“Well, I won’t marry her. I wouldn’t be a man at all if I let anyone pick a wife for me. Anyway, I have a girl and if I want to, I’ll marry her,” he roared at his father, who shouted back, “Well so, you can leave tomorrow without a penny and never come back.”

This is exactly what Grandad did. Next morning, bright and early, Grandad walked to Tralee, found himself a job on the railway line, where he worked all his working life. He did eventually marry his girlfriend but, unfortunately, she died in childbirth a few years afterwards. Later on, he met my granny, married her, and they had six children, my mother being the eldest.

My granduncle Tom married but they had no children. As a child, my aunt brought me to the farm where I met my grumpy Granduncle Tom and his wife, Julia. She was very kind and baked the loveliest apple tarts and soda bread on her open fire. Often, she sent me down a bag of potatoes, unknown to her husband.

The brothers never spoke and my grandad never once went back to the farm that should have been his.

Fire your internal drill sergeant, it’s time to be kind to yourself
10