Jennifer O’Connell: ‘Mother’s Day cards are for no women I know’

Mothers, in the world of Hallmark, are nurturing, self-sacrificing, unthreatening. They love bunnies and lavender 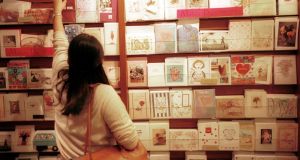 None of the Mother’s Day cards out there apply to my mother, and they certainly don’t apply to me. Photograph: Chris Hondros/Newsmakers

I’m looking at Mother’s Day cards for my mother. I’m not exactly inspired. Mothers, in the world of Hallmark, are nurturing, self-sacrificing, unthreatening. They love bunny rabbits, lavender and bouquets of flowers in unlikely, lurid hues. They exist only as a reflection of their greatest creation: and that, of course, is the person whose signature is scrawled across the inside. You were always there, they read. You give us so much.

“Happy Mother’s Day,” exclaims one I found on the internet, “to my Greatest Teacher, my Best Friend and my Cheapest Therapist.”

None of them apply to my own mother. She is nurturing and kind, and yes, she offers free therapy on occasion. But those aren’t the most interesting things about her. She’s also creative, strong, feminist. Impeccably stylish. Whip smart. A baker of scones and ideas. She used to coax deaf children out of their silent worlds. She still has a Sherlock Holmes-like ability to read human behaviour.

Mother’s Day cards do one thing well: they reflect the way we sanitise motherhood, turning women who have children into bland, one-dimensional figures, whose worth is measured in a currency of sacrifice and self-immolation.

That is the most shocking thing about becoming a mother, the violent evisceration of your previous identity. No one warns you about this until it happens because we’re not supposed to mind. We chose this. It’s a gift, they say, the subtext being that you don’t moan about a gift.

Motherhood, the same people gush, is the most important job in the universe. And yet there are no university degrees helping to ease the transition from that life to this, no night classes, not even a real handbook. Instead, there are books with titles that suggest children are animals to be subjugated and bent to our will: “Toddler Taming”, “Baby Whisperer”, “The Contented Little Baby Book”. I read, much too late, that Gina Ford never even had children of her own. She had cats, apparently.

There are also well-meaning strangers in the Spar or on the bus. Listen to your instinct, they say, you’re doing great. But then, a beat later, they’ll add: Wrap that child up. Or: Take that blanket off. She’ll overheat. Or: She needs a nap. In the early years, I’d obediently do whatever they suggested, and then they’d look at me like I’d failed an important test. Listen to your instinct, they’d repeat, but my instinct was as bewildered and sleepless and cross as the rest of me.

In the chemist one day, perhaps just a few days into my motherhood career, the baby was strapped to me, screaming like she alone had been sent to warn humanity of the imminent apocalypse. Does she have colic, an older woman wondered, sending me into a tailspin of panic. Why was she asking me? Did I look like some kind of expert? Clearly, I didn’t know what I was doing – the evidence was strapped to me, bellowing. I went home and Googled “colic” and cried again. I was crying for the child who might or might not have colic (it turned out she just didn’t like straps), and who certainly had a hopelessly inept mother. But I was also crying for myself, for the identity that had been forcibly retired the second the kindly midwife in the labour ward handed me a cup of tea, and called me “Mammy”.

Here’s the good news. It gets easier. Either that, or you find a way for the two parts of your life to peaceably co-exist. In the almost 12 years since, I’ve noticed that some of the best, happiest mothers are the ones who were the most resistant in the beginning, the most affronted by the cleaving of their lives in two.

Time winds down, and the long days spool into short years. It passes in a blur of hot cheeks against yours and sterilising and late night dashes to the pharmacy and wiping and glitter-covered Mother’s Day cards and rows over hairbrushing and small hands on your knee.

It passes in countless tiny triumphs only you notice – the first time you get through a supermarket and no ends up lying on the floor. The first time you get to watch a movie the whole way through. The first time they say “I love you” before you say it. Then one day, you turn around, and the angry little baby in the carrier is tall enough to wear your clothes and sling an arm around your shoulder, kind enough to tell you you’re doing great, though not with bunnies and lavender. And you believe her, because she should know.

To all the mothers: to mine and to yours; to the inept ones, the patient, resistant, nurturing, or kind ones; the creative ones and the smart ones and the funny ones; the ones who love bunnies and lavender, and the ones who would rather have their heads hacked off, happy Mother’s Day.