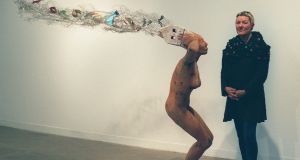 Janet Mullarney in the Temple Bar Gallery in Dublin with one of her works, My Mind is Frazzled. Photograph: Jack McManus

The death has taken place of acclaimed Dublin-born sculptor Janet Mullarney, who spent much of her life living and working in Italy. She exhibited both in Ireland and abroad and was renowned for her enigmatic yet playful sculptures made from wood, bronze, plaster, cloth, sponge, glass, aluminium, papier maché and wax. Her dreamlike human and animal figures sit, stand, lie or soar with a dynamic energy which grapples with age-old human dilemmas of power, control and freedom.

The director of the RHA, Patrick Murphy, said “her sculptures are a little like Angela Carter’s novels, where the everyday and the ordinary can suddenly plummet into the surreal and the mythic. Tables and stairs, trolleys and mattresses are the props that carry extraordinary characters. Subjects mined from the natural world and anthropomorphised to play out human joy and human tragedy.”

Although based principally in rural Tuscany since the 1970s, Mullarney exhibited in Ireland from the 1990s onwards. Her first shows here were in the Orchard Gallery in Derry and at the Limerick City Gallery. When the Irish Museum of Modern Art (IMMA) opened in 1991, she was one of the first 45 artists whose work was purchased by the museum’s then director, Declan McGonagle.

Since the 1990s, Mullarney was represented in Ireland by the Taylor Gallery, where her work was exhibited almost every year. She also had solo exhibitions at Dublin City Gallery, the Hugh Lane; the Royal Hibernian Academy; the Crawford Municipal Gallery; the Museo de Arte Contemporanea in Oaxaca, Mexico; and the Casa Masaccio Arte Contemporanea in San Giovanni Valdarno, Italy.

The artist Alice Maher, a friend of Mullarney, said “her quirky, deadly, hilarious and heart-breaking vocabulary adds a welcome sting to the history of figurative sculpture”.

In 2010, Mullarney exhibited a collection of older and new work – both figurative sculpture and video – at the Taylor and RHA galleries simultaneously. In 2015-2016, a major exhibition of new work, My Mind’s i (sic) toured several Irish venues. In 2019, IMMA showed an expansive range of her sculptures, paintings, drawings, video and installations as part of a group show from their collection.

Mullarney’s public art commissions include suspended figures in the city centre of Gröningen in the Netherlands, numerous sculptures of various sizes on one floor at the Royal Victoria Hospital in Belfast and playful pieces throughout the interior of St Ultan’s primary school in Ballyfermot, Dublin. Her work is also in several public and corporate art collections including that of the Arts Council, the Office of Public Work and Allied Irish Bank.

She won the Royal Ulster Academy perpetual silver medal in 2009, the RHA sculpture award in 2008, the Irish American Cultural Institute’s O’Malley art award in 2005 and a Pollock Krasner Foundation award in 1998. She became a member of Aosdána in 1999.

Janet Mullarney was the fourth of 11 children of Marie Mullarney, founding member of the Green Party, and her husband, Seán Mullarney, chief accountant at Dublin Port and Docks Authority and antiquarian book dealer. She grew up in the Dublin suburb of Rathfarnham and was home-schooled for a time before attending Loreto High School Beaufort. She finished her secondary school education in Sandymount High School.

Following her secondary school, she left Ireland to live in Italy and travel in Europe. She worked in restaurants, on fishing boats and in vineyards, discovering galleries and soaking up the street life of continental Europe. She studied art part-time at the Accademia di Belle Arti in Florence but it was through working for wood carvers restoring Renaissance furniture and picture frames in the early 1980s that she truly learned her sculpting skills and began to create her own work.

Determined, fearless and unconventional in her approach to life, Mullarney always described herself as a self-taught artist. Her knowledge of Renaissance and Romanesque art, the Chola art of South Indian temples, and both historic and contemporary art from North Africa and Mexico was gained from her travels throughout Europe, Mexico, North Africa and India. She wore exotic and unusual clothes, loved spending time in the sun and had a strong empathy for refugees and asylum seekers.

One of her closest friends said that aesthetics drove everything that she did: “In whatever aspect of her life – from her personal style (shoes!) to music, food, or even day-to-day household goods – she has difficulty comprehending how people could surround themselves with the mundane. A shopping expedition with her could be both pleasurable and fretful as she sought out that unusual tool, the most unusual textiles, or the little shop that sold a unique local produce.”

In 1994, Mullarney was diagnosed with oesophageal cancer from which she recovered. Following her illness, she channelled the distress and discomfort into what arguably became some of her best pieces. In 2017, the cancer returned and while she suffered greatly in the last few years of her life, she remained resilient and creative right to the end.

She is survived by her siblings Barbara, Alasdar, Claire, Aidan, Pierce, Killian and Oliver. Her sisters Tinu and Alison and brother Eoin predeceased her.

What sold for about €385,000 in Kilmainham, Glenageary, Howth and Beaumont?
5

How will the ‘Ryanair generation’ of emigrants fare post-Covid?
8