Get Jon Bon Jovi live in your classroom, plus five other things that lifted our spirits 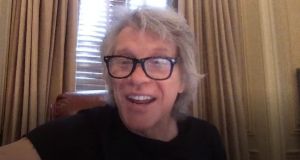 Jon Bon Jovi on his video call with pupils at Marsh Pointe Elementary in Palm Beach Gardens, in Florida

“If you get to put your feelings down on paper, sometimes they’ll turn into songs, sometimes they’ll turn into stories, and you never know where it might lead you.” Imagine you’re a locked-down kindergartener in Florida and one morning Jon Bon Jovi pops up on your screen. It could be a tad scary. But it’s also heartwarming. Michael Bonick, a teacher and Bon Jovi fan, took his virtual classroom to new levels this week when the rock star joined his writing lesson about life in the coronavirus quarantine. Last month the Grammy-winning 1980s rocker released an unfinished version of Do What You Can, a ballad about the US battle to contain the virus, and asked fans to submit verses to help finish it. Bonick sent his students’ writings about being stuck at home and got a message back that Bon Jovi wanted to meet the kids on their laptops. Earlier this week the 20 children (and their parents, who might be more familiar with his music) watched as Bon Jovi strummed an acoustic guitar and worked some of their lines about life in quarantine, idleness and isolation into his lyrics.

On a day when we’re faced with the sobering reality that two staff at St Luke’s hospital in Kilkenny have died from Covid-19, acknowledging the work and sacrifice of all those at the front line has never seemed more relevant. So there’s a call, at 8pm today and every Thursday, to go to your front door or balcony and show your support. “Clap your hands, stamp your feet, bang a drum if you have one – or a pot will do,” says Buzz O’Neill Maxwell, the music and nightclub promoter who is spearheading #applaudthefrontline. Ireland’s evening of applause on March 20th, and Holy Saturday’s Shine a Light, saw citizens express their support all over the country. Let’s all do it again, tonight and every Thursday.

“When this will all end our hearts will have broken, with hundreds of tiny shattered tears.” But these souls will be stronger. The Phoenix is a seriously evocative, hopeful three-minute film, a reminder of what we’ve put to sleep and what will reawaken. Made by Tenth Man creative agency and released on YouTube and Instagram, it invites us to “imagine that voice again, that face again, that embrace again”. It has bravery and heroes and love, in a script by the copywriter Sarah Coffey, with Eva-Jane Gaffney’s voiceover. It’s a reminder that the Covid-19 crisis will come to an end. “Together we will rise again. Stay safe, stay safe, stay strong.”

The difficulty of finding love in a Covid climate has a whole new meaning. Amanda Liberty, who is in her mid-30s and from Leeds, in England, complained about an article in the Sun that mocked her declaration of love for a light fitting. She’s in a long-term relationship with a 92-year-old German chandelier that she has called Lumiere, she said, and objected to Jane Moore naming her the recipient, in one of her columns, of a “Dagenham Award (Two Stops Past Barking). The Sun pointed out that Liberty had talked to the media extensively about her attraction to chandeliers and other objects in the past, and had changed her surname during a self-declared public relationship with the Statue of Liberty. The British press regulator has ruled that her attraction to light fittings is not a protected sexual orientation.

From the we’re-all-in-this-together department, it’s heartening to see Renault and Axa Insurance team up to offer free cars and insurance to medics returning to Ireland to help fight Covid-19. The offer is for two months’ use of a car, with free motor insurance, for doctors and nurses returning from abroad to support the HSE. Medics apply via covidcarcover.com.

For some comfort food, try today’s Kitchen Cabinet recipe, a spiced dhal with fried okra and rice from Santosh Thomas of 3 Leaves, the acclaimed Indian restaurant at Blackrock Market, in Co Dublin.