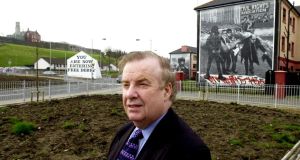 Ivan Cooper, who has died after a long period of ill-health, was a leading figure in the North’s Civil Rights Movement in the late 1960s, then one of the founders of the SDLP in 1970. An inspiring orator, one of his rallying calls was for Catholics and Protestants to fight for their rights “as the blacks in America were fighting”.

He was an organiser of both the Civil Rights’ Movement’s most famous marches: the October 5th 1968 march in Derry, when marchers were batoned by police: and the anti-internment march in Derry on January 30th 1972, which became known as Bloody Sunday.

He sacrificed much for his stand. Because he was Protestant, right-wing Unionists saw him as a traitor. Family cars were bombed, his home was attacked, and he was frequently threatened. Even religious practice became dangerous: on Sundays he had to cross the Border to attend Divine Service in Donegal. His wider family suffered, too.

Ivan Averill Cooper was born on January 5th , 1944 in Kilaloo, outside Derry, sixth of seven children to Robert Henry Cooper and his wife Mary Jane, usually called Jeannie (née Moore). They lived in an 18th Century house without running water or electricity. His father worked as a foreman for Londonderry County Council.

His mother operated a sub-post office. Because their house belonged to the Church of Ireland, the parents undertook caretaking duties round the parish church. The family attended Church twice on Sundays. All were well-versed in the Bible. For a time, Cooper was a Sunday-School teacher.

He was educated at Cumber Killaloo Primary School, then Derry Technical College. Leaving school, he worked for a while in a solicitor’s office, then entered shirt factory management. He worked mostly in Derry, but also in Westport, Co Mayo.

Briefly he was an Orangeman, establishing a Junior Lodge. His Orangeism flowed from a love of pomp and ceremony, not sectarianism. For a time, too, he was a member of the Young Unionists. Time in a local pipe band developed his thinking. It led Orange parades, and regularly lent instruments to a local Ancient Order of Hibernians band. He queried why Unionist politicians were not as accommodating.

A seminal event was when a popular local Presbyterian stood as an Independent Liberal for the County Council against the sitting Unionist. Cooper was horrified when the man’s effigy was burned on a bonfire.

Above all, he thrived as an organiser. He organised an onion-eating completion in an Orange Hall; football teams; and a showband. He was gifted at producing posters, with a flair for promotion and marketing.

Having abandoned Unionism he supported an unsuccessful Liberal candidate for Londonderry Corporation. Then he joined the Derry Labour Party, local branch of the Northern Ireland Labour Party, where he helped produce the magazine.

Through Derry Labour Party he became an organiser of the October 5th march. Such was his popularity, and talent as a speaker, that he became Chair of the Citizens’ Action Committee established afterwards. Derry Catholics greatly admired him as a Protestant who publicly supported Civil Rights.

Through 1968 and 1969 he was a prominent speaker at Civil Rights events. When serious rioting began in Derry with the Apprentice Boys’ march on August 12th 1969 he tried with others to restrain rioters, and was injured by a missile destined for police.

The violence of August 1969 began the move away from his non-violent politics of uniting Catholics and Protestants.

In 1970 he cofounded the SDLP along with Bernadette Devlin, John Hume, Austin Currie and Gerry Fitt

In 1973 he was elected from the old Mid-Ulster constituency to the first Northern Ireland Assembly. He became Minister for Community Relations in the power-sharing administration. This only lasted months, until brought down by a Loyalist strike. He also twice stood unsuccessfully in Mid-Ulster for Westminster.

In the early 1980s he dropped out of active politics. The initial promise of the SDLP had faded, and he had to make a living.

In 1983, with great disappointment, he withdrew from active politics and became an insolvency practitioner. After a stroke, his health progressively deteriorated and he became a wheelchair user. Nonetheless, much of the work that Cooper had done helped ultimately to smooth the way for the Good Friday Agreement in 1998.

His portrayal by James Nesbitt in the 2002 film Bloody Sunday brought him back to public attention and recognised his support of the families in their fight for justice.

He was present with the relatives when the Saville Report was published, and although the prime minister, David Cameron, made a formal apology and described the paratrooper operation as “unjustified and unjustifiable”, Cooper called for the soldiers concerned to be prosecuted. “In my church the commandment says ‘thou shalt do no murder’, and I believe that commandment,” he said.

He is survived by his wife, Frances: daughters Sinéad and Bronagh: brother Robert-Lynn: grandchildren Cashel and Luca: and son-in-law Conor.