Catherine Nevin: A prisoner, my student and my friend

While teaching the murderer, Derek Byrne got to know the woman behind the headlines

Catherine Nevin has died. In 2000 she was found guilty of the murder of her husband Tom Nevin at their Co. Wicklow pub, Jack White’s Inn in March 1996. Report: Conor Gallagher / Video: Bryan O'Brien. 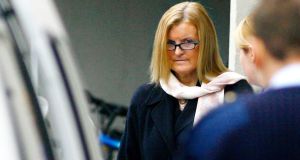 Catherine Nevin at the Criminal Court of Appeal in 2010: “It was clear that she genuinely cared for the women she met in prison.” Photograph: Courtpix

I recognised her straight away. She introduced herself simply as “Catherine” but several people in the room knew Catherine Nevin by sight. She had been convicted in the year 2000 of her husband Tom Nevin’s murder and in widespread media coverage was frequently described as the “Black Widow”.

On sentencing, the judge told her she had “assassinated” her husband twice, once when she murdered him and again when she had destroyed his character in court.

When I first saw her in person, that night in September 2014, I was hosting an induction evening for a part-time course in addiction studies for Maynooth University. It seemed Nevin, who had arrived at the university outreach centre in Dublin 8 accompanied by a member of prison staff in plain clothes, was a prospective student.

The following day I received a call from a senior member of staff at the university to establish if I would be comfortable teaching a convicted criminal, especially such a well-known one. I didn’t know it at the time but Nevin had been refused access to similar courses.

The staff member asked if I had recognised her and suggested my experience in media (I had contributed to a number of publications and radio programmes) might equip me for possible unwanted attention from the press.

I had no difficulty accepting her as a student. It would not be the first time that I had taught a prisoner. A number of years earlier I had had a male student attend on day release from Mountjoy Prison. I had never asked but was unofficially informed that he had been convicted on a murder charge.

I had therefore seen the benefits of education as a rehabilitative tool for long-term prisoners who had become institutionalised and had lost the life skills needed for the outside world. In his case, simply being accepted without question by the other students went a long way to rebuilding his confidence and helping him to forge new relationships.

The certificate course in addiction studies is an adult-education course. The students tend to be people working or hoping to work in the field of addiction as case workers, counsellors or community drugs workers. Some of the students have themselves been addicted to drugs or alcohol and have completed a period of recovery. The course attracts mainly women and, while students require no previous academic attainment, they must be over 21.

From the start Nevin showed a keen interest in the subject, an interest sparked by her observations of drug use among the women prisoners with whom she shared her daily life. Her understanding of the theoretical perspectives on addiction was regularly backed up with stories of prison life and how her eyes had been opened to experiences she had not known before her conviction for murder.

We didn’t have to wait long for the media attention. One evening we noticed someone waiting for her to leave; on another evening a man actually came into the classroom supposedly looking for a yoga class. The ensuing reports were largely predictable, focusing on the amount of money Nevin was costing the taxpayer by attending a university course while still in prison.

It sometimes struck me that Nevin revelled somewhat in her notoriety. For example, she made a point of telling the class about the reporter who followed her around the campus at Maynooth University when she had travelled out to use the library one Saturday afternoon. (After that first visit accompanied by a prison officer, she was permitted to travel alone to her studies.) She made the class laugh at her various attempts to lose him between the bookshelves.

However, it was also clear that she genuinely cared for the women she met in prison, and her accounts suggested that they viewed her with a certain respect.

It was also clear that 15 years behind bars had not completely hardened her to prison life. One night, she arrived at class visibly shaken, having witnessed a violent incident in the jail. She broke down in tears as she described the severity of the beating one woman had given another.

There were many more stories of prison life, and openness in general became a cornerstone of the course that year. Nevin played a key part in that. She had made a point on the first night of lessons of telling the other students quite openly that she was a prisoner on release from the Dóchas Centre at Mountjoy Prison. As time went on, her fellow students, seemingly without exception, grew to like her. The subject of her crime was never discussed in class.

While Nevin was diligent in her work and always submitted assignments early, she claimed to lack confidence in her ability to transfer her thoughts coherently on to paper. She would always ask me to be kind with my feedback and to go easy on her.

In fact, her work showed a high level of intelligence and an understanding of the complexities of addiction and human nature. She attained a first-class honour at the end of the first year. But I think she craved the positive feedback which was perhaps the closest thing she had come to a kind word in a long time.

In the two years I have known Nevin I would say that we have become friends. While she decided to leave the second year of the course early, against my advice, we maintained regular phone contact.

She had been allowed to ring certain people – including me – from the prison phone during her course. Cut off from the internet, she would often call me at weekends for support with an assignment and later might also call, for example, to ask how I was if she knew I had been ill.

She also phoned to wish me a happy birthday when I turned 50 and arrived at class that week with a card and a three-dimensional drawing she had made for me.

Though I felt a growing personal fondness for this student, I was also cautious to maintain professional boundaries. I focused primarily on my role as Nevin’s tutor, but having worked with people in rehabilitation from substance addiction, I felt that in this case I could also play a secondary role, in her rehabilitation from prison life.

I faced an internal struggle in coming to care for someone who had been convicted of taking the life of another human being. I tried to rationalise that she had been tried and convicted and served her time.

Our relationship by phone continued after her studies ended, and we recently discussed my writing this article.

Nevin had expressed a wish to work with women prisoners on her release and I agreed that this could be a positive and realistic path for her to follow. Her experience of life as one of the State’s most notorious women prisoners coupled with her intellectual capability could have been a unique asset to the prison system.

I believe women prisoners would have responded positively to Nevin’s first-hand experience of prison life, and helping others would have provided her with a sense of purpose and the possibility of rebuilding her life after release.

But, just as Nevin was due for release, she was diagnosed with a terminal illness. She has just months to live. There are those who might say that she deserves no less for what she did. I do not think this is the view of a civilised society.

I have written this because I believe even a person convicted of an abhorrent crime can grow and learn and ultimately make some positive contributions to the world.

No person deserves to be reduced to cheap labels such “callous killer” or “Black Widow”. They do not describe the Catherine I have known.

How can I tell my husband it is over and I want a divorce?
6