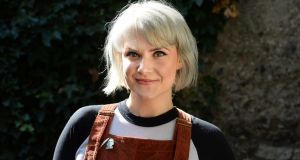 When Erin McGathy came to Ireland in 2015, she kept a video diary of her time in the country. She recently revisited these short snippets of her life, which were recorded shortly after she arrived seeking solace from her marriage – which was rapidly falling apart back in Los Angeles.

The first time McGathy came to Ireland was on her honeymoon. The previous year, the couple had travelled to Scotland where her husband proposed.

“We joke now that there were so many bad omens leading up to the engagement. I had eaten something on the plane over that made me really sick and threw up in his backpack and all over the ring. When we got to Inverness, he was planning on proposing but we kept getting into arguments because I thought he was going to end the relationship. I feel like he proposed because he felt like it was the right thing to do, not because it was the actual right thing.”

The daughter of a military chaplain, McGathy spent her childhood moving from Japan to Italy and then to Texas and Florida before finally settling in California. When she was 11, her mother was diagnosed with cancer and died a few years later.

“When she passed away it felt like I needed to take care of my dad and brother. I think we did a pretty good job of taking care of each other.” The young teenager dealt with her mother’s illness and subsequent death by immersing herself in theatre and comedy productions at school.

“I had the boldness at 15 of holding auditions and putting on shows once a month in my school. I loved the camaraderie and collaboration and it came at just the right time because it was such a good outlet while my mum was sick. I could put all my energy into it.”

After school, McGathy moved to San Francisco for university but dropped out after her first year to join a comedy improvisation group. She then moved to Los Angeles and started performing at the city’s Upright Citizens Brigade theatre. McGathy’s appearances on stage evolved into a podcast she named This Feels Terrible, through which she met her husband in 2011. The couple became engaged in 2013, however, the cracks in their relationship started to emerge even before their marriage the following year.

“Our relationship was very public because he’s a well-known writer and we were always open about everything with his podcast. We would fight a lot in front of our friends, which was really awful and traumatic. The relationship was emotionally abusive. I felt lost and became very depressed and agoraphobic so I stopped leaving the house. People were very surprised when we broke up because we threw so many parties and our wedding was massive. In front of people, things looked great but when we were alone they got really dark.

“I really thought it was my problem because when I talked to him he’d say you’ve married someone who is successful in the industry, you can have anything you want. I had this guilt that I wasn’t being grateful. I didn’t realise I was so trapped.”

In July 2015, McGathy flew to Ireland to spend three weeks working on an organic farm outside Dundalk as a break from her emotional woes. She extended the trip after she was introduced to Dublin’s comedy and theatre scene through comedian Alison Spittle, who she had previously interviewed on her podcast.

“I’ve lived in so many different places so I know what it’s like to feel more connected to one place than another. I immediately felt at home in this culture, where people seemed really mindful of each other. In LA, people value themselves differently and the metric that everyone compares themselves by is not how compassionate someone is but their success.”

McGathy also related to Irish humour. “I think watching my mum die and moving around a lot gave me a very dry and dark sense of humour. In LA, people always said lighten up when I would joke about death but here that’s never been said to me. I feel like the Irish are the funniest people in the world.”

McGathy also found cultural events very accessible to new arrivals in the capital. “In Dublin, you can go out any night of the week and find something that’s going on or people hanging out. In LA, it’s a lot harder to find a community.” She also learned to appreciate the Irish climate. “When the sun comes out in Ireland, you associate it with drinking outside, seeing your friends and going to the canal. But in LA it’s so consistently sunny that people mostly stay inside. I’m outside way more in Dublin than I ever would have been in LA.”

After spending five weeks in the country in 2015, McGathy returned to the US, broke up with her husband and filed for divorce. She returned to Ireland a number of times before moving over in 2016.

Last year, McGathy co-founded the MOB theatre comedy theatre and school, which holds alternative comedy events at Dublin’s Wigwam venue. The company, which is named after a speech WB Yeats gave on the steps of the Abbey Theatre, hopes to build a community and hub for comedians to meet and collaborate on projects.

“Moving here is the thing I’m proudest of in my life; doing something that no one really understood but that I knew was right for me. I love Dublin for the people, for the emotional intelligence and the humanism I find in places that I believe were lacking from my life in LA. I feel like Dublin is my soul city and I can’t see myself living anywhere else.”

I started the ‘gender reveal’ party trend, and I regret it
5