Hitch-hiker’s guide to the national mood 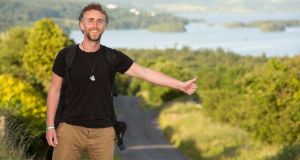 Ruairi McKiernan, founder of Spunout, on Green Road in Sligo as he hitch-hikes around Ireland. Photograph: James Connolly/PicSell8

You might expect a 35-year-old man hitching around modern Ireland to spend most of his time waiting by the side of the road, watching cars go by. But Ruairí McKiernan says that, so far, he hasn’t had a problem getting a lift. People consider it a novelty to see someone hitch-hiking and stop out of curiosity.

But then his journey is something of a novelty in itself. McKiernan is a founder of the youth organisation Spunout (spunout.ie), and was appointed to the Council of State by President Michael D Higgins last year. His Irish hitch-hiking tour began after the director of the MacGill Summer School, Dr Joe Mulholland, asked McKiernan to contribute “a citizen’s view of Ireland” to this year’s event.

The hitching trip is his research. McKiernan set out a week ago and hopes to take in about 20 counties, before ending up in Glenties at the end of July for the annual summer school.

When we spoke earlier this week, he was making his way from Galway to Derry, relying on the kindness of strangers, including a pair of Italian tourists who offered him a lift as far as Mayo.

Over a meal on Achill Island, the three compared the economic situations of Ireland and Italy. One of the Italians said that where he came from the average wage was down to €1,000 a month, and so to him Ireland didn’t look too bad a place. It’s all about perspective, McKiernan says.

McKiernan spent some time in Australia this year and on his return, he wanted to get back in touch with Irish people and hear from them what a new vision for Ireland might look like.

He’s at something of a crossroads in his own life – in his mid thirties, soon to be married, and finding paid work in Ireland often hard to come by. So his journey is as much a personal voyage of discovery as a reconnection with Ireland. Along the way, he is blogging about his experiences (at www.community.ie, on Facebook and Twitter) and recording the thoughts of some of the people he meets.

Some of those who have given him lifts have spoken to him about personal tragedies. “One woman had a younger brother killed in a hit-and-run by a drunk driver. She told me she knows who did it and that it happened 20 years ago and there was a cover-up. She gave me an insight into resilience, into how to survive something like that and still enjoy life.”

Other common themes are the importance of community in many parts of Ireland, a vibrant local sense of right and wrong, and the number of people struggling to make sense of modernity and progress.

Back to basics
“Many people talked to me about simplicity and about how life has become way too complicated,” he says. “The dream of progress as promised was all about making life easier. There is a sense it has failed us. I’m hearing [that] we are going off track not economically, but socially.” People tell him they are interested in “getting back to basics and prioritising things like friends, family and spending time in nature”.

McKiernan has heard stories of hope and heartache, including a farmer in Connemara who was selling his remaining livestock and moving back in with his parents as he couldn’t survive financially on his own anymore. The young farmer had rejected emigration so that he could have a role in the life of his young daughter.

McKeirnan also detects an ambivalence towards political parties, stronger than anything shown in opinion polls.

“A major theme is one of power and a feeling that a particular elite in Ireland is shafting the majority of people. I have yet to meet anyone who said they will vote Fianna Fáil or Fine Gael. A lot say they either won’t vote at the next election or simply don’t know who to vote for.

“I also detect sometimes from the professional classes a sense that emigration is not such a big deal. You get to travel the world and come back. That’s true for some I’ve met, particularly those whose parents are financially well off. In the west though, for many of those I met emigration is very real and raw and of the forced variety.”

Open up
To pay his rent and look after food, phone and accommodation costs while on the road, McKiernan set up an online donation page. Within the first few days, he received several hundred euros in donations from people he calls “shareholders” in his journey.

He used to hitch-hike a lot growing up in Co Cavan, and while new road networks can make hitch-hiking between major cities tricky, he hasn’t had a problem getting a lift so far. “I think a lot of people giving me lifts grew up hitch-hiking themselves,” he says. “I know from my past that people really open up when they pick up a hitch-hiker. The material I’m getting is really very honest .”

He spends several hours each night writing his blog.

He expects to return to Dublin next week and may cycle around parts of the city if hitch-hiking there is not possible. A community group in Moyross has challenged him to hitch-hike to their area (an invitation he will take up), and he also hopes to spend time in Cork and Cavan before eventually ending up in Donegal at the MacGill Summer School where he will present findings and videos from the tour on July 28th.