Historian produced ‘a bibliographic monument to his patriotism’ 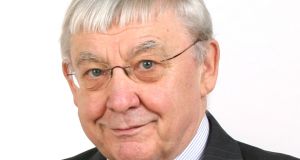 Donnchadh Ó Corráin: An inspiring and engaging lecturer, he could also be highly entertaining

Donnchadh Ó Corráin, who had died aged 75, was an eminent historian of early and medieval Ireland.

He challenged long-held orthodoxies and inspired many young scholars to look at Early Ireland through a different lens. He demonstrated time and again that far from being an isolated backwater on its western periphery, Ireland in the early medieval period was fully engaged with mainstream European thought and excelled in the intellectual life of the continent.

Ecclesiastical centres such as Clonmacnoise, Armagh and Bangor were powerhouses of learning, possessing extensive libraries, scriptoria and workshops. Irish scholars and artists, through their writing and artwork, made a substantial contribution to the cultural heritage of Europe and were much sought after as teachers in the royal courts of the Carolingian Empire.

Ó Corráin was very much at home in the vast body of literature in Latin and Early Irish that has been transmitted to us from medieval times. In his extensive research on these sources he had an unfailing ability to contextualise a work and to identify the purpose its author had in mind.

An inspiring and engaging lecturer, he could also be highly entertaining, and was much sought after as a plenary or keynote speaker at international conferences.

He was “a scholar, an accomplished linguist, a philologist not merely competent but fluent in all the languages vital to an understanding of the history of our archipelago”, according to David Howlett of Oxford University classics department, who described him as uniquely master of law, genealogies, chronicles and Biblical manuscripts, “the four pillars of early Irish literary culture”.

He was reared in Groyne, Killorglin, Co Kerry, the son of Tadhg Curran, a farmer and Mary Clifford, a nurse. He attended St Brendan’s College, Killarney, and St Patrick’ College, Maynooth, for a brief period before graduating with a first-class honours BA from University College Cork in 1964. Three years later, he took a first-class honours MA in early medieval Irish history from UCC and became a scholar in the School of Celtic Studies at the Dublin Institute for Advanced Studies.

After three years’ lecturing at University College Dublin, he returned to UCC where he spent most of the rest of his academic life. He was a visiting Lecturer in Medieval History at Cambridge University in 1977 and visiting Professor of Celtic at the University of Pennsylvania in 1978-79 before being appointed Associate Professor at UCC, a role he fulfilled for the next 20 years.

During that time, he was elected a member of the Royal Irish Academy (1982), was the first Carroll Lecturer at Oxford University (1990) and was awarded a DLitt by the National University of Ireland (1990). He was also a Senior Research Fellow at Balliol College, Oxford, in 1993-94 and O’Donnell Lecturer at the same university in 1996-97. Appointed Professor of Medieval History at UCC in 1999, he held the position until his retirement in 2007.

In 1982, he founded the Medieval Academy of Ireland and established its journal, Peritia, which he edited from its first edition until the year before his death. It became notable for its wide range and intellectual generosity and was a haven for interdisciplinary scholarship, printing works by authors who might not otherwise have been published.

He also founded the Curia project, which is now known as Celt (Corpus of Electronic Texts), an internet text-base with now more than 6.5 million words of historical and literary texts in Irish, Latin, medieval French and English. It is encoded in HTML and SGML (http://www.ucc.ie/celt), and is freely available as a resource for teaching and research.

In addition, he was founder and director of the Cork Multi-Text Project, set up to provide new textbooks and a dedicated website to meet the requirements of the new Leaving Certificate syllabus in history.

Among his extremely extensive publications were: Ireland Before the Normans (1972), Women in Irish Society: The Historical Dimension (ed, with Margaret McCurtain, 1979), Gaelic Personal Names (with Fidelma Maguire, 1981), James Hogan: Revolutionary, Historian and Political Scientist (ed, 2001), Ireland 1870-1914: Coercion and Conciliation (ed., with Tomás Ó Riordáin, 2011), The Irish Church, Its Reform and the English Invasion (May, 2017) and Clavis Litterarum Hibernensium (3 volumes, over 2,000 pages, July 2017).

Regarding the last-named, enormous work, his son Tiarnán said: “It is a source text for Ireland, the book of his life. And it is a fitting summa, completed in the darkest of times, when illness brought him low.” David Howlett called it “a bibliographic monument to his patriotism”.

His pastimes included reading, talking, discussing politics and reflecting and commenting on life and the world, in addition to walking in peaceful and scenic places and carrying on conversations on all sorts of subjects. He greatly enjoyed socialising and discussing the topics dearest to his heart with friends and colleagues.

He is survived by his wife Fidelma Maguire and their children Tiarnán, Saorla, Gormla and Aengus; daughter-in-law Amy; grandchildren Tadhg and Oscar; his brothers Humphrey, Patrick, Tadhg, Seamus, Thomas and John; his sisters Noreen and Paschaline; brothers-in-law, sisters-in-law, nephews and nieces.