Douglas Carson obituary: BBC producer during height of the Troubles 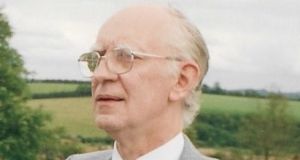 Douglas Carson’s parents were staunch Plymouth Brethren and though he remained close to his parents, he discarded their religion as soon as he was able, opting instead for his own brand of liberal humanism.

Douglas Carson, who has died aged 81, was many things: a teacher, historian, parodist, genealogist, broadcaster, farmer, Titanic aficionado, and, above all, a gifted radio and television producer for the BBC in Northern Ireland during the worst years of the Troubles.

Douglas David Patrick Carson was born in 1938 at the family farm on the outskirts of Belfast, the only child of Hugh Henry Carson and his second wife Harriet (nee Connolly). Both his parents were staunch Plymouth Brethren, and Douglas grew up in an intensely evangelical atmosphere. Though he remained close to his parents, he discarded their religion as soon as he was able, opting instead for his own brand of liberal humanism. In 1950, he became a pupil at Annadale Grammar School in Belfast, and went on to read history at Queen’s University under JC Beckett. At 18, in the intervals of attending lectures on the wool trade in Flanders, and seminars on the Cattle Acts of the 1660s, Carson was dealing with actual cattle at his father’s hill farm, and helping to rescue sheep and lambs from snowdrifts during the ferocious winters of the mid-twentieth century.

After graduating from Queen’s in 1960, Carson joined the staff of Orangefield Boys’ School as a history teacher; he signed on for a term and stayed for six years. At the same time, he was turning his attention to Schools Broadcasting for BBC NI, writing scripts for radio on topics relating to Irish history and culture and working with James Hawthorne on his pioneering secondary school series, Two Centuries of Irish History. He seemed indefatigable – but in fact, the three jobs – teaching, farming and broadcasting – took their toll, and in 1966 Carson became ill with tuberculosis. Once he had recovered he resigned from his teaching post, joined the BBC full-time as a radio producer and moved to the house in east Belfast in which he lived for the rest of his life. The Carson farm remained in his possession, but was leased to a series of agricultural tenants.

Carson’s extraordinary talents, evident from the start of his association with the BBC, were now consolidated. In his role as radio producer, he elicited contributions from leading Irish and English poets and writers, including Seamus Heaney, Brian Friel, Michael Longley, Paul Muldoon, Ciaran Carson (no relation), the historian Jonathan Bardon and the distinguished children’s author Rosemary Sutcliffe. He boosted the career of the young Liam Neeson, employing him as an actor on the series Modern Irish History. He established lasting friendships with BBC colleagues from John Boyd and Sam Hanna Bell, to the great singer and song collector David Hammond, and fellow-producer Tony McAuley. In 1971, Carson married one of his production assistants, Marie Keenan, and soon became the father of two children.

During the 1970s and 80s, Carson worked for BBC television as well as radio: one short film that stays in the mind is his A Far Cry of 1982. Ostensibly about Paul Muldoon in Co Armagh, it is actually a tribute to Muldoon’s father. To look at the thing sideways, as it were, is typical of Carson’s playful but always serious and inspiriting approach to all kinds of programme-making.

Among Carson’s outstanding characteristics were a faintly lugubrious and world-weary Ulster charm, a dry humour and a formidable intellectual capacity. Whatever enthusiasm took hold of him (and there were many) he immersed himself in it to the full. At one point he began looking into his own family history – to take that example – and ended by turning genealogical research into an art form. He always had an eye for an irony and relished an unexpected connection. It was Carson, for example, who traced the present queen of England, Elizabeth 11, back to her direct ancestor Hugh O’Neill, Earl of Tyrone, that whopping thorn in the flesh of the first Elizabeth.

Carson left the BBC in 1989, but continued to broadcast and lecture (without notes) throughout Ireland, speaking resonantly and authoritatively on everything from genealogy and the Battle of Benburb, to his literary heroes Louis Mac Neice and WR Rodgers. He honed his drawing skills and began to send out cards at Christmas depicting his friends in various guises (Michael Longley as Santa Claus, the botanical artist Raymond Piper as a wilting flower). He became president of the Titanic Trust and helped to promote Belfast as a centre of Titanic studies. He was co-opted on to several educational boards and committees. Life never ceased to engage and enthrall him. (Inveterate cigarette-smoking may have shortened it, however.) While his native province tore itself apart, Carson was at one with his poet, musician and other friends in upholding civilized values in a time of turmoil. He believed, with John Hewitt, that “patriotism has to do/with keeping the country in good heart”. Carson acted on this throughout his career, and by placing his emphasis on our shared heritage and common store of enterprise and wit, he kept it in high spirits too.

Douglas Carson is survived by Marie and their children, Kerry and Connor.