Nobel committee finally wakes up to the ingenuity of women 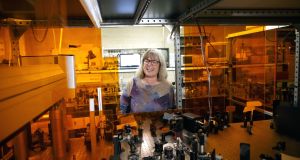 Nobel laureate: Donna Strickland at her lab at the University of Waterloo, in Canada. Photograph: Cole Burston/Getty

It took a while, more than half a century. Last week Dr Donna Strickland, a scientist at the University of Waterloo, in Canada, became the third woman to be named a Nobel physics laureate.

The jubilation on social media was palpable, and headlines made much of the fact that Strickland was the first woman to win the Nobel Prize in Physics for 55 years, joining Maria Goeppert Mayer, who received the prize in 1963 for her work on electrons, and Marie Curie, who won it in 1903 for her work on radioactivity.

The following day the US scientist Frances Arnold became the fifth woman to win a Nobel Prize in Chemistry (Curie got one of those, too), for her work on enzymes.

We came up with a way to increase the intensity of a laser by many orders of magnitude. These lasers are now used extensively worldwide

Strickland shares her award with the French scientist Gérard Mourou, for developing ultrafast high-intensity lasers, and with Arthur Ashkin, who developed optical tweezers that use beams of light.

Since the Nobel announcement Strickland has expressed her surprise at the announcement – alongside an obvious joy in her work. “We came up with a way to increase the intensity of a laser by many orders of magnitude,” she explains to The Irish Times. “These lasers are now used extensively worldwide for commercial applications, as well as pushing the scientific frontiers of ever-shorter pulses and higher intensities.”

Brian MacCraith, a professor of physics and president of Dublin City University, describes Strickland and Mourou’s breakthrough as a fundamental shift in our ability to use high-intensity lasers in research, industry and surgery.

“Where previously you would have needed massive facilities to generate such a high-intensity of laser, their ‘chirped pulse amplification’ method meant that you could effectively generate ultrashort high-intensity pulses with table-top lasers,” he says. “That means now we can use these lasers more easily to explore the fundamental science of matter, in advanced manufacturing and in precision surgery, such as eye surgery.”

MacCraith, a long-time advocate of greater gender diversity in science, technology, engineering and maths, says the low number of women to have won the Nobel Prize in Physics is shocking, but with Strickland’s prize he senses a glimmer of change.

He is particularly struck by the comparison between Strickland and the astrophysicist Jocelyn Bell Burnell, from Northern Ireland, who many consider was overlooked for a Nobel Prize for her part in the discovery of a type of rotating star called a pulsar in the 1960s (a feat that last month earned her the $3 million Special Breakthrough Prize in Fundamental Physics). Bell Burnell’s PhD supervisor was later awarded the Nobel Prize.

“Both Strickland and Bell Burnell did work in their PhDs that eventually led to a Nobel Prize, which is phenomenal,” MacCraith says. “But Strickland now shares the Nobel Prize with her PhD supervisor” – Mourou – “which I think is hugely important.”

Strickland says she will be “forever grateful” that she had the opportunity to work with Mourou, whom she describes as “one of the real pioneers of ultrafast-laser science”, and she reflects on the change in gender diversity.

“When I was a student I didn’t have a female professor, either as an undergrad or grad student,” she says. “Now I am a female professor with female colleagues in my department, and there are far more female students now than when I was in university, so there are certainly more women in physics now. Two female scientists became Nobel laureates last week, which is a very positive change.”

(Strickland’s academic title of associate professor prompted a flurry of debate on social media; she told the BBC why she does not have a full professorship: she has never applied for one.)

Dr Yvonne Kavanagh of Carlow Institute of Technology believes Strickland’s Nobel Prize will bring about more changes, because it immediately makes Strickland a role model. “We need more visibility of women physicists,” says Kavanagh, who is cochair of the Institute of Physics in Ireland, and who works on its women in physics group to gather information about gender diversity in the discipline.

Wikipedia is the most powerful resource we have to preserve history. Unfortunately, most editors on English-speaking Wikipedia are men, and they create content about other men

One of the big issues for women in physics is the lack of representation in the higher echelons of higher education, Kavanagh says. “At the moment about 52 per cent at entry academic grade are female, but when you look at the professors only about 19 per cent are women, and that needs to change,” she says. “We have wonderful women out there doing amazing work in physics, but we need to make sure the environment supports them. That’s why at the IOP we have initiatives to build networks of women, and the Juno charter” – which recognises and rewards departments that are tackling the under-representation of women in university physics – “supports a great working environment for everyone.”

One of the most striking stories to be highlighted following Strickland’s naming as a Nobel laureate was that she did not have an entry on Wikipedia. A submission for her to have a page had been rejected in May, because of disputes about her notability.

But she is not the only one: other freshly minted laureates have lacked Wikipedia pages in the past too. Dr Robert Rohde pointed out on Twitter that of the 30 physics laureates since 2007, neither Takaaki Kajita (who won for his work on neutrinos) nor Hiroshi Amano (who won for his work on blue light-emitting diodes) had a Wikipedia page before his Nobel Prize. “Obviously, Wikipedia still has room to improve its coverage and recognition of scientists,” Rohde tweeted.

Dr Jess Wade, a physicist at Imperial College London, is on a mission to ensure more women scientists have a presence there. “Wikipedia is the most powerful resource we have to preserve history, documenting the stories and discoveries of today for the people of tomorrow,” she says.

“Unfortunately, the majority of editors on English-speaking Wikipedia are men – between 80 and 91 per cent – and they create content about other men. Only 17 per cent of the biographies are about women. Every day in 2018 I’ve been writing the story of a woman or under-represented minority scientist.”

Wade heartily welcomes the news from Sweden last week: “It’s great that the Nobel committee are finally waking up to the ways of modern science and recognising the ingenuity of women,” she says. “Strickland and Arnold are rewriting the history books: 2018 is the first time since the Nobel Prizes began, in 1901, that women have been awarded both the chemistry and physics prizes.”