‘Adults need to lead by example on the GAA sidelines’

Sound Off: What does it teach young sportspeople if they see a parent swear from the sideline? 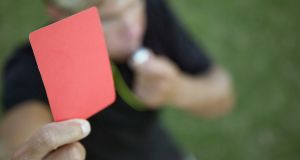 'What does it teach young sportspeople when they see a coach or parent challenge a decision or swear from the sideline?' Photograph: Corbis

I have been a GAA fan all my life. Summers in our house are spent following the Galway hurlers and Mayo footballers around the country. Luckily over the past number of years, these tours have stretched into the heady days of September and we’ve even managed to celebrate bringing home an All Ireland.

There are many things I love about the GAA aside from the games. I love the sense of community, I love that it’s unique to this country, I love that the reason it works is because so many thousands of people volunteer their time. Since my children have started playing I realise just how much goes into making this amazing organisation work. What I don’t love is the attitude and language of some parents and coaches on the sideline.

Every weekend, on hundreds of pitches around the country, teenage referees take charge of what are mostly friendly underage matches. And every week an increasing number of these kids are subjected to abuse, bad language and accusations of cheating from the sidelines.

Many of them have only done a basic refereeing course. But they are all players who know more about the game than the many so-called experts who shout profanities at them from the sideline. And even if they didn’t, this treatment would still not be justified. They are teenagers, and are doing their best.

What kind of an example are adults giving to children when they abuse a referee? What does it teach young sportspeople when they see a coach or parent challenge a decision or swear from the sideline at a kick missed, or a goal chance wasted?

We encourage our children to play sport for many reasons, not least the health benefits. But we are also trying to teach them sportsmanship, how to be a team player, how to accept defeat and lose gracefully, how to try your best, regardless of the result.

My father’s most frequent lecture to us as children was “if you’ve nothing nice to say, say nothing”. It would be nice if some adults on the sidelines this weekend took this advice on board.