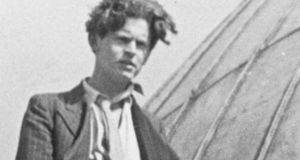 Patrick Scott, when a student in 1942

Patrick Scott, who has died aged 93, was a major force in Irish art for more than 70 years. A painter, designer and graphic artist, he was known for work that was elegant and spare.

A pioneer of abstract art in Ireland, he is best known for his Goldpaintings , which involved the application of gold leaf (or occasionally silver or palladium leaf) and tempera on unprimed canvas, he was also a noted designer of tapestries.

His work is distinguished by a number of recurring themes. The circular form that appeared in early paintings continued to engage him to the end of his career, as did the abstraction of natural forms to two-dimensional geometric planes.

From the outset, his paintings were considered daring and original, given the conservative, insular and repressive nature of the Irish art establishment in the 1940s. This was a time when the formal education of artists was based on a rigid and repetitive 19th-century academic curriculum, when landscape was understood as a form of pastoral patriotism and when experiments with new forms of expression were either scoffed at or scorned.

Born in 1921 in Kilbrittain, Co Cork, Scott was educated at Monkstown Park School, Dublin, and St Columba’s College. A woman known to him as Aunt Linda, who lived with his Aunt Janey in London, funded his architectural studies at University College Dublin. On qualifying as an architect in 1945, he joined the practice of his namesake, Michael Scott, where he remained until 1960, when he began painting full time.


Dynamic
As a student, he was required to pass an exam in drawing, and this entailed attending classes at the National College of Art. Because of the unremitting tedium of the classes, Scott and some friends organised their own life-drawing sessions, which were much more dynamic and productive.

From 1941 he was affiliated to the White Stag group of painters, which was founded in London in the 1930s and which moved to Dublin during the second World War.

His work was also shown in the first Irish Exhibition of Living Art , which provided a platform for artists outside the mainstream. He held his first solo exhibition at the White Stag Gallery in 1944.


Solo show
The exhibitions met with a cool critical reception. Scott’s solo show was dismissed by one reviewer as a series of poor jokes in good frames. A decade later his Deserted Racecourse , shown at the Living Art exhibition, was mocked by Myles na gCopaleen in The Irish Times .

His most important work as an architect was as part of the team involved in the design and construction of Busárus. Another major project was Donnybrook bus station. Many of his projects in the 1950s were co-ordinated through the Signa agency, initiated by Michael Scott and Louis le Brocquy. He was later responsible for every aspect of Iarnród Éireann’s corporate image, down to the livery on the trains.

In 1958 he represented Ireland at the Guggenheim international exhibition, showing work with André Masson, Alberto Giacometti, Mark Rothko, Edward Hopper and Joan Miró. His Woman Carrying Grasses was the only exhibit purchased by the Museum of Modern Art in New York, and the museum’s first purchase of work by a living Irish artist.

In 1960 he won the national prize at the Guggenheim exhibition. That year he was also Ireland’s representative at the Venice Biennale. But it was not an entirely happy experience, primarily because of the “grudging and dismissive attitude” of the Irish government to Ireland’s participation.

He designed his first theatre set, for The Playboy of the Western World , at the Fenice Theatre in Venice, and later designed a revolving set for The Plough and the Stars at the Abbey Theatre.

From the early 1960s his work reflected an international awareness, and he began the Device series of paintings, prompted by his dismay at the testing of hydrogen bombs (which were then generally referred to as “devices”).


Rosc
He drew on his architectural experience when he transformed the Royal Dublin Society’s premises into a light and airy exhibition space for the Rosc exhibitions of 1967 and 1971. In 1980 he was one of a small group of Irish artists selected for the main Rosc exhibition.

His late Goldpaintings were influenced by a visit to China, Japan and Thailand in the 1980s. But the Japanese look predated his travels in the Far East. As far back as 1970 he recalled saying that he had been “more influenced by the Japanese flag than by anything else”.

His work is included in public and private collections in Ireland and abroad. He was a director of Kilkenny Design Workshops, a governor of the National Gallery of Ireland and a trustee of the Irish Museums Trust.


Retrospectives
Retrospective exhibitions of his work were held in 1981 and 2002. He was conferred in 1990 with an Associateship of the National College of Art and Design and in 2002 with an LLD in Civil and Canon Law by UCD.

A member of Aosdána, he was in 2007 conferred as a Saoi of that body. Works by him were included in the Arts Council’s travelling exhibition Into the Light in 2013.

Another major retrospective of his life and work opened this month – on the day after his death – at the Irish Museum of Modern Art and the VISUAL Centre for Contemporary Art in Carlow.

“In all my paintings I’ve been simplifying and simplifying all the time,” he said in 1972. “I keep whittling them down; I think I’ll always do that. The simpler I can do a thing, the more satisfaction.”

He is survived by his partner, Eric Pearce.