Live in Ireland but don’t drink alcohol? You’ll be treated with extreme suspicion

Laura Kennedy: We put forth, and comfortably accept, a narrative which allows us to excuse inexcusable behaviour committed when drunk 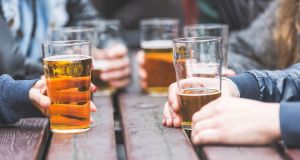 Most people have done things they regret when intoxicated.

If you don’t have a friend who behaves like a complete idiot when they’re drunk, that idiot is probably you. Most people have done things they regret when intoxicated: sent a jabbering, slurred text to an ex; stolen a perfectly innocent traffic cone that was quietly relaxing on the road; or eaten three pounds of instant noodles dry from the pack. These sorts of transgressions are silly, rather childish, but usually not that harmful.

Some people commit worse errors when they’re drunk. They become aggressive, behave in sexually inappropriate ways, or render themselves or others unsafe with stupor and become an irresponsible burden to those around them. Anyone who has had an evening ruined by a friend drinking too much will recognise the scenario. You wrestle them, barely able to stand or speak, all the way home while they protest their desire to drive or wander off alone at 2am or invest in their friend’s microbrewery start-up, where they make beers with names like Badger’s Tract and Dirty Weasel.

Irish people are generally tolerant of both the above kinds of behaviour (perhaps not the microbrewery part). Poor decision-making and embarrassing, drunken lapses in judgment are calcified aspects of our culture. We put forth, and comfortably accept, a narrative that allows us to excuse inexcusable behaviour committed when drunk due to drunkenness. The unexpressed presumption that underlies this very poor logic is that alcohol has the capacity to change personalities, and under its influence we are more capable of committing actions that are “out of character” for us. We talk about intoxication as though it is something that happens to us, rather than a state we reach through a series of decisions, the consequences of which we are entirely responsible for.

Clinical Psychological Science recently published an interesting paper called An Experimental Investigation of Drunk Personality Using Self and Observer Reports. It confirmed something that most of us intuitively know makes sense – that our personalities change less when we drink alcohol than we think they do, or at least that those around us observe less of a change.

The primary change in personality that occurs, according to sober observers who know us, is in extroversion. The researchers gave subjects a quantity of alcohol designed to produce a blood-alcohol level of about .09. For reference, the Irish drink-driving limit is a level of .05, or 50mg per 100 millilitres of blood, for experienced drivers. As with most psychological research of this kind, conducted in a lab, it has methodological shortcomings.

A study of 156 people is hardly large enough to indicate trends on a macro scale reliably, and it is always possible that other people’s impressions of our behaviour or character under the influence can be as inaccurate as our own. Still, the research articulates an experience we have all had and helps to contextualise and challenge the Irish idea that alcohol alters our personality rather than inflating pre-existing traits.

If you live in Ireland but don’t drink alcohol, you will at worst be treated with extreme suspicion or accused of being pregnant. At best, you will be subject to fond but acrid accusations of being “a dry shite”. As a nondrinker myself, and someone with a long and extreme acquaintance with the worst aspects of alcohol dependence and the behaviours that accompany it, I am happy to lay my bias out for inspection.

However, it has always seemed to me that when people drink, two things happen to their character – they become bolder, and they become less inhibited. Drunk people don’t express views the sober version of them does not hold.

Alcohol does not suddenly make you rude or bigoted. It merely crumbles the wall of self-interest that encourages us not to express these sentiments to others. A person who would never intentionally violate someone else does not suddenly develop a desire to grope or assault them because they are drunk. Alcohol loosens us up and lowers our levels of discernment, but we make the choice to drink, and are responsible for what we do, drunk or sober.

We are not someone else when we’re drunk – we are ourselves, but with the lacquer sanded off.

Kathleen Swaine obituary: The ‘coolest, most beautiful cat in town’
5

What is the going rate for a home in... Co Leitrim?
Real news has value SUBSCRIBE