Center Parcs: ‘99.9% of locals’ back its plan to open in Ireland

The holiday company is about to reveal models of its proposed resort in Co Longford. What benefits might its plan bring – and what are its centres like? 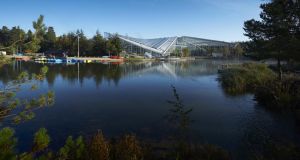 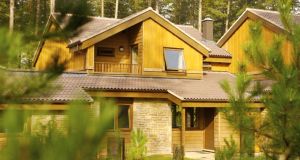 Parcs life: an Executive lodge at Center Parcs at Woburn Forest in England 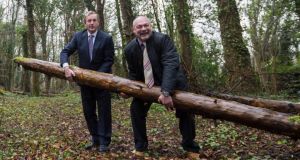 Parcs life: Taoiseach Enda Kenny with Martin Dalby of Center Parcs at the site for its proposed village, in Newcastle Woods in Ballymahon. Photograph: Brenda Fitzsimons 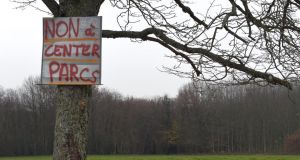 On either side of Newcastle Road, outside Ballymahon, in Co Longford, is Newcastle Wood. This plantation of about 150 hectares was once owned by the prominent King-Harman family; since the 1930s it has been owned by the State and managed by Coillte. It consists mostly of evergreen Norwegian spruce planted in the early 1990s.

This unprepossessing stretch of unspoilt woodland, hardly known to anyone but locals, and home to a sizable population of fallow deer, may one day become the site of the biggest tourism development in the history of the State.

On April 2nd this year the leisure company Center Parcs UK announced that, subject to planning permission, it had chosen Newcastle Wood as the location for its first adventure village in Ireland, which will cost at least €100 million to build.

Of all the counties in Ireland, Center Parcs picked one so overlooked as a tourism destination that it merits just eight paragraphs in the 700-page Lonely Planet guide to Ireland.

It is hard to find anyone in Longford who is not enthusiastic about the prospect of Center Parcs coming to the county. “It is the best thing that has ever happened to Ballymahon,” Michael Cooney, the owner of Cooney’s, the town’s only hotel, says.

It is certainly the best thing that has happened to Cooney’s. Center Parcs has told him that his hotel can expect to be full throughout the 2½-year construction phase.

On Monday Center Parcs will unveil models and computer-generated images of the development. It has been assiduous in cultivating the support of locals, including politicians. It would seem to be pushing at an open door.

The chairman of Longford County Council, Gerry Warnock, is particularly keen about the name for the Irish site: Center Parcs Longford Forest. “This is instant international brand recognition for our fair county and will finally put us on the map as a significant tourist destination.”

The association’s chairman, Peter Dennehy, describes the Irish midlands as an “unemployment black spot, and any initiative to create employment in this region is greatly to be welcomed”.

Center Parcs says the Longford Forest site will employ 750 people during construction and 1,000 locally when it is fully operational. The benefits to the area are obvious.

Center Parcs, which intends to apply for permission to go ahead in October, will be hoping that its development does not end up in planning hell. Woburn Forest, the company’s newest development in the UK, took 10 years from initial planning to completion as it was using green-belt land. A Center Parcs in southeastern France has become a magnet for protesters.

So far the Longford development has encountered no public opposition. Locals hope it stays that way. “I can’t understand for the life of me why people living in the locality would not look at the bigger picture,” Cooney says. “Everybody around here is foursquare behind it. I’d say 99.9 per cent of the people are in favour of it.”

Center Parcs has five adventure villages in England: Whinfell Forest, in Cumbria, Sherwood Forest, in Nottinghamshire, Elveden Forest, in Suffolk, Longleat Forest, in Wiltshire, and Woburn Forest. All are within a two-hour drive of big towns or cities.

The site is so big that visitors are encouraged to travel around it by bicycle. Center Parcs has the largest private fleet of bicycles in the UK.

The 700 chalets at Woburn Forest, which are set among the trees and follow the contours of the terrain, range from the basic Comfort, which have three bedrooms and are the most popular type for families, to the Executive, which sleep eight and have free wifi, a playroom, a hot tub and a steam room.

The centrepiece of every Center Parc is a “subtropical swimming centre”, a glass-roofed pool complex not unlike the National Acquatic Centre, in Blanchardstown. Enter it and you are assailed by the fetid heat – it is kept at a constant 29.5 degrees – by the noise and by the whirl of waterslides, flumes and rapids. But you won’t be able to swim lengths: there is not enough space.

Center Parcs provides a range of 100 activities, both indoor and outdoor, among them abseiling, archery, bowling, badminton and fencing. Visitors should find it hard to get bored, although they could go broke, as you pay extra for any activities.

Center Parcs says that families usually spend as much on activities, food and drink as they do on accommodation.

The company has an unashamedly middle-class cachet. Shops at its villages stock Fat Face, Timberland, Lulu Guinness and Cath Kidston, among other brands that flag its target market.

Many baulk at the cost, and there are claims of unfair price hikes during school holidays, but enough people visit to make Center Parcs UK a “phenomenally successful” business; Simon Kay, a spokesman, says that demand in England is so high that a substantial number of its customers will travel to Ireland when Longford Forest opens, in 2019 (subject to that planning permission). He concedes that Irish people may need convincing that it’s worth it.