Carl O’Brien: A Cork man in the capital

No matter how far you go, even if it’s only as far as Dublin, you never leave behind the legacy that you’re from the chosen land 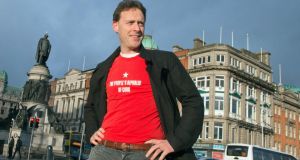 I realised this on a blind date many years ago. My date, a Dub, confessed that, no, she had never in fact visited the real capital. Not only that, but she no real desire to see the place.

After picking myself up from the floor, I did what any self-respecting Corkman would do: I embarked on a lengthy monologue on the merits of the people’s republic.

The biggest county, the tallest building, the longest coastline, the (second) deepest natural harbour in the world . . . A wealth of sports people so celebrated we only refer to them by their first names: Roy, Sonia, Donal Óg, Sean Óg . . . The spiritual home of Irish gastronomy and the only place to pick up a decent spiced beef . . . And not forgetting the natural beauty and how Venice when you think about it is really the Cork of Italy – if they’d ever get around to filling the canals in.

And then, the piece de resistance: Lonely Planet had just named the city one of the top 10 in the world to visit. In fact, they had used words like “sophisticated”, “vibrant” and “diverse”, while it retained a “relaxed charm and quick-fire wit”.

After about an hour of this, my date stepped out for “a cigarette” (she didn’t smoke). The next sound I remember was a mumbled excuse, the screech of taxi brought to a sudden halt, following by the strange smell of burning rubber.

It was, I admit, a prototypically Corkonian response: tinged with a healthy resentment of the doubter and sounding just a tad like someone trying to convince himself of his home town’s exalted sense of self. This is the lot of those of us blessed with Cork birthrights.

I’ve been living in Dublin for almost as long as a I grew up in Cork. And while I love the (notional) capital, you never behind the legacy that you’re from the chosen land.

This, after all, is what you’re taught from infancy. The curriculum states that Cork is the source of true authenticity – and anything from anywhere else (especially Dublin) is a cheap imitation of the original. It’s why we have the “real capital” and Jack Lynch, the “real taoiseach”. In fact, Cork is probably the only place in the world you can be homesick for – when you actually live there.

Tommy Tiernan captured it well a few years ago in a sketch on the first moon landing.

He imagined a Cork version of Neil Armstrong, descending a rickety ladder onto the desolate lunar surface, looking around him, before solemnly announcing to the world: “It’s great, like, but it’s not Cork.”

Some outsiders – inexplicably – seem to find all this self-regarding pomposity a little bit grating and will typically claim that Cork’s obsession by defining itself in opposition to, say, Dublin, is the classic sign of an inferiority complex.

Peel beneath the fatty layers of self-trumpeting bravado, they whine, and you’ll find a gnawing anxiety over its peripheral second-city status.

And, okay, I admit it. There can, on occasion, be an imaginary, falsely superlative version of the place. Even the county’s most ardent supporters have had their off-message moments.

Seán Ó Faoláin railed at times against the small-town provincialism and the “damp dark miasmic valley”. Paul Durcan, a one-time Cork resident, captured something similar when he wrote about the city being as “intimate and homicidal as a little Marseilles”.

But Cork’s intimacy is something to be cherished. The convenience of a city, with the scale of a town, is what defines Cork.

After all, it’s people who make a neighbourhood, a village, a town or a city. The social fabric that binds a community together – running into friends, familiar faces in the shops – is in rude health.

Instead of feeling bullied or harassed on the city streets, a stroll along the wide footpaths, the re-designed main thoroughfare and its connecting arteries of smaller streets, is a pleasure. It feels vibrant, friendly and alive.

Was it any surprise that when Queen Elizabeth popped over to Dublin, she was kept behind heavy security and miles away from the restive natives? But when she visited Cork, the authorities were happy to let her wander about the English Market, pick up some messages, and then pop out for a chat with the locals.

Then there’s the county.

As a native of east Cork, we tend to feel a little peeved at all the attention Kinsale and all points west get. But these days, east Cork is the new west Cork. Towns like Midleton, with the world-famous Jameson Distillery, thriving farmers’ market and top notch eateries, including the AA Gill-approved Farmgate, are must-sees. To the north, there’s the majestic Blackwater Valley and charming places to stay. And, as for the west, well, you know all about that. (I could go on – but the editor has warned me about space constraints on the page. )

We are used to the insults, though. A typical barb – from embittered Jackeens or jealous Kerrymen, usually – is the only tragedy about the burning of Cork by the Black and Tans was they didn’t finish the place off.

We like to think we rise above these kind of petty insults. In fact, the rest of the country could learn much by following the example of Cork exceptionalism.

They say the definition of a modest Corkman is someone who thinks he’s only as good as everyone else. So, as we emerge from the recession, crippled by national self-doubt and wracked by a lack of civic pride, we should all begin to channel our inner Corkonian. Imagine the self-confidence we’d have? The depths of self-regard for the country? The endless possibilities? It’s kind of scary, now that I think about.

At the end of the day, Cork has a way of winning people over.

Even Seán Ó Faoláin mellowed with age. When he wrote his memoirs at the end of his life, he couldn’t help admiring the city’s “sedate air, its quiet sense of self-possession . . . it’s something that one can only speak of as an air or a tradition, indigenous, time-established, as old as Shandon’s Bells”.

He added: “I would not have been born elsewhere. There is steel in Cork. There is flint and the spark of fire. There is endless challenge. I would not, I repeat, be born out of it . . . there are many streets in Cork that my homesick ghost will haunt.”

And remember that date I had all those years ago?

Well, we had a second. And a third. And today, she’s my wife. And yes, she too has learned – after years of relentless propaganda, admittedly – to love the real capital.