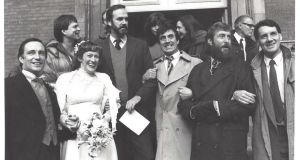 Members of the Monty Python comedy troupe attended the wedding of Nancy Lewis to Simon Jones, left. One member, Michael Palin, far right, said after her death, ‘Python benefited so much from her quiet, persistent enthusiasm.’ Photograph: Chris Parker/NYT

Nancy Lewis, whose single-minded belief that Americans would find a quirky British comedy troupe amusing was instrumental in getting that troupe’s breakthrough show, Monty Python’s Flying Circus, broadcast on American television, died on December 20th in Manhattan. She was 76.

Her husband, actor Simon Jones, said the cause was leukemia.

In early 1965 she interviewed an emerging band called the Who. She didn’t think they’d be around long

Lewis was head of publicity for Buddah Records, an American company, when in 1971 it struck a distribution deal with the British label Charisma Records that included two albums by Monty Python, which had become famous in Britain after the debut of Flying Circus on the BBC in 1969 but was virtually unknown in the United States.

She championed the albums and then the television series, finally getting it on the air on PBS in 1974. The next year, when ABC broadcast an edited compilation of the show in its weekday late-night slot, she urged the troupe to go to court to try to stop a second such broadcast, since the editing ruined much of the Pythonesque humour, which relied on running gags, incongruity and absurdity. The suit didn’t stop the second broadcast, but on appeal it did establish that the Pythons owned the copyright to the “Flying Circus” episodes, an important precedent.

“Heavy-duty fundamental Protestant religion ruled – dancing was one of many major sins,” she wrote in an autobiographical essay years later, recalling her childhood. Yet she developed a taste for Elvis Presley and other early rock’n’roll.

After graduating from Redford High School in Detroit, she earned a bachelor’s degree in film and television production at Michigan State University in 1964.

While in college she was a campus correspondent for Billboard, and after graduating, she went to New York and then London, where the rock scene was exploding. She found work writing for a pop music magazine, Fabulous. In early 1965 she interviewed an emerging band called the Who. She didn’t think they’d be around long.

“They didn’t seem to like each other very much and they were such different people, I just could never see them lasting,” she later told writer John Swenson. Soon she would be the group’s publicist. She also helped promote Jimi Hendrix, Joe Cocker, Traffic and other acts in the 1960s.

Lewis began taking the troupe’s records to FM radio stations, which she knew from her experience promoting rock acts were willing to try new things and play longer cuts

She alternated between the United States and England, working for Island Records and Track Records before landing at Buddah in 1971. Among her proudest accomplishments there, Jones said, was helping to introduce English band Genesis in the United States. It was part of the Charisma distribution deal, which brought Lewis a stack of British records – all of Charisma’s releases.

What caught her eye were two LPs at the bottom of the pile – Another Monty Python Record and Monty Python’s Previous Record.

She began taking the troupe’s records to FM radio stations, which she knew from her experience promoting rock acts were willing to try new things and play longer cuts. The Pythons started developing American fans, but there was still a reluctance to import the TV series. Converting the episodes from the European broadcast format to the format used in the United States was expensive at the time, and there was also a fear that Flying Circus was too full of Britishisms and British sensibility to interest Americans, not to mention too saucy.

But Lewis kept at it, and PBS affiliates began showing the series, and Lewis became the Pythons’ American manager. In 1975, when ABC (which had bought the rights to the show’s fourth season from Time-Life, which owned them) broadcast the first instalment of the intrusively edited compilations, it was Lewis who brought the butchery to the Pythons’ attention. They were displeased.

The result was a sometimes comical proceeding in federal court in New York in which the Pythons, seeking an injunction to stop the second broadcast, tried to put across why the unabridged versions of their sketches were funny and the edited ones were not. Lewis was among those who testified.

Jones, in a telephone interview, said Lewis also helped the Pythons on their individual projects. When Terry Gilliam got into a dispute over the editing of his acclaimed 1985 movie, Brazil, Jones said, it was Lewis who clandestinely showed Los Angeles critics Gilliam’s cut of the movie. The Los Angeles Film Critics Association gave the film its best picture, best director and best screenplay awards.

In addition to her husband, Lewis is survived by their son, Tim.