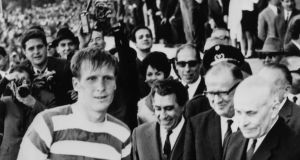 Billy McNeill of Celtic receives the European Cup trophy from the president of Portugal after the Scottish side’s 2-1 victory over Inter Milan in Lisbon in the European Cup final. Photograph: Central Press/ Getty Images 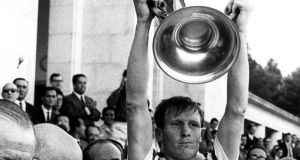 As captain of Celtic, Billy McNeill, who has died aged 79, was the first British footballer to hold aloft the European Cup. That memorable image represented the apex of a long and distinguished career as player and manager.

In an era that permitted all national league champions to compete on equal terms, Celtic had disposed of their counterparts from Switzerland, France, Yugoslavia and Czechoslovakia before facing Inter Milan of Italy at the Estádio Nacional in Lisbon on May 25th, 1967.

All but one of the team McNeill led out had been born within 10 miles of Celtic Park. They were the rank outsiders but playing what their manager, Jock Stein, described as “pure, beautiful, inventive football”, they defeated Helenio Herrera’s exponents of the ultra-defensive catenaccio (door-bolt) system by two goals to one.

The dais on which the trophy was presented stood on the opposite side of the stadium to the dressing rooms, and in the chaos that followed the final whistle McNeill was separated from his team-mates and had to lift the trophy alone. He later reflected that his only disappointment in the whole experience was that they were not alongside him to share the moment. However, they stuck together as a team of close friends for the rest of their lives, inextricably linked by an extraordinary shared experience.

As captain of the Lisbon Lions, McNeill held a unique place in the affections of Celtic supporters for more than half a century. His intelligence, articulacy and leadership qualities all enhanced the image of an exceptional sportsman and role model. His entire club career of more than 800 games was in Celtic colours.

Early in his Celtic career, McNeill, the only one of his group who owned a car, acquired the nickname “Cesar”, in deference to Cesar Romano, the getaway driver in Ocean’s 11.

As the years went on, the spelling had to be adapted since the name would have been more appropriate to McNeill’s imperious bearing, acquired from his Dundonian father, Jimmy, who was an army PE instructor.

McNeill was born in Bellshill, Lanarkshire. His mother Nellie’s parents were Lithuanian immigrants, and in his early childhood the extended family lived in their miners’ row cottage. When he was nine, his father was posted to Hereford, where Billy attended a rugby-playing school and showed promise as a winger. Returning to Scotland took him back to football, and he completed his schooling at Our Lady’s high school in Motherwell, a breeding ground of many fine players.

In 1957, Stein, then Celtic’s youth coach, saw him play for Scotland schoolboys against England and immediately sought his signature. McNeill recalled Stein asking his mother: “If he steps out of line, is it okay if I give him a skelp?”

Mrs McNeill readily agreed and the deal was done. Billy, who was academically able, regretted not going to university but could not refuse the lure of Celtic. He received an honorary degree from Glasgow University in 2008.

The early 1960s was a grim period in Celtic’s fortunes. While they had promising young players, the club’s management structure was archaic, with all power lying in the hands of the chairman, Bob Kelly. Stein left in 1961 to become manager of Dunfermline Athletic and, by 1965, McNeill was on the verge of seeking a transfer – when his mentor returned to Celtic with immediate and devastating effect.

They won the first available trophy, the Scottish Cup, and set off on a run of nine successive league titles (there would also be six more Scottish Cups and six Scottish League Cups). The team was built around McNeill in the centre of defence, where he developed what he described as a “telepathic understanding” with John Clark, who occupied the sweeper’s role. It was a classic partnership in a team generally dedicated to stylish, attacking football. McNeill also went on to win 29 Scottish caps, usually with Clark alongside him.

When McNeill finished playing in 1975, he intended to pursue a business career. However, an investment of the modest savings which football had yielded, in property and hotels, proved disastrous. He turned to management, briefly with Clyde, then, very happily, with Aberdeen, for whom he laid the foundations of future success under Alex Ferguson. However, he answered the call to become Celtic manager in 1978 on Stein’s departure.

This proved a difficult experience. In five seasons, McNeill led the club to three league titles but, frustrated by a lack of resources to buy players, eventually concluded that “loyalty was a one-way street”. He left to manage Manchester City, who had just been relegated from the old First Division, and in his second season McNeill led them back into the top flight. He then had a brief and unhappy spell as Aston Villa manager before becoming reconciled with Celtic in 1987.

Celtic, entering their centenary season, were faced with the free spending of Rangers, on a scale unprecedented in Scottish football. McNeill’s heroic credentials were reinforced when he led Celtic to a League and Cup double in that momentous season. However, the club was entering a period of turmoil, with boardroom battles and financial pressures undermining McNeill’s role, which ended in 1991.

He continued to be in great demand for media work and appearances at Celtic supporters’ events. His unique place in the club’s history was recognised in 2009 when he became its first official ambassador, cutting a respected figure in the boardrooms of Europe. The following year he was diagnosed with dementia. A statue of him holding the European Cup aloft was unveiled in 2016 in the approaches to Celtic Park.

In 1963, McNeill married Liz Callaghan, then a dancer with the TV variety show The White Heather Club, in Scotland’s “wedding of the year”. She survives him, along with their five children, Susan, Carol, Libby, Paula and Martyn, and eight grandchildren.

Running reunion: Time to reconnect with our running buddies
8