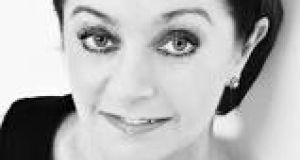 Katherine Lewis: at 16, she became the first Irish student to win a place at the Royal Ballet School in England.

Katherine Lewis, artistic director of Irish National Youth Ballet, passed away on Monday, April 15th, while in Lanzarote on a short break prior to the company’s spring performances. Lewis was one of Ireland’s greatest ballet champions, having coached a generation of dancers who went on to professional careers in Ireland and abroad. Under her directorship, Irish National Youth Ballet earned well-deserved praise, especially for commissioning original choreography and live music for its annual productions.

Despite her own impressive pedigree as a dancer, Lewis will be most remembered for her passion and determination in propelling Irish ballet forward. When Lewis took the helm of Irish National Youth Ballet in 2006, she quickly became noticed as a kind and nurturing leader, committed to a strong work ethic and producing superb performances that gave the 40 young dancers in INYB, aged eight to 19, a sense of what it is like to work professionally.

Lewis grew up in the Dublin suburb of Cabra. One of four children – and the only girl – of Fred (Edward) Lewis who was an office manager with Hayes Solicitors and his wife Bridie.

She attended St Dominic’s College in Cabra and her penchant for ballet emerged early through lessons at the age of eight with the late Myrtle Lambkin in Dublin. Lewis was immediately singled out as a burgeoning talent, going on at 16 to become the first Irish student to land a place at the Royal Ballet School in England, at the same time earning the first dance bursary from the Arts Council to help fund her training there. The following year, Lewis became the first Irish student to receive the Princess Grace Scholarship to the Acadamie de Danse Classique in Monte Carlo.

In 1979, Lewis joined Irish National Ballet under director Joan Denise Moriarty. During her tenure there, Lewis performed soloist and principal roles, and was part of the cast when that company toured Moriarty’s ballet Playboy of the Western World to London and France. With live music by The Chieftains, this ballet gained international attention, and Lewis became known for her role in the ballet as the Widow Quinn, prompting one critic to praise her “subtle comic wit”. During her performing career Lewis also featured in ballets by Charles Czarny, Roysten Muldoon, David Gordon and Domy Reiter-Soffer.

Throughout her life Lewis maintained strong artistic connections in Ireland and abroad, later commissioning choreographers to make new dances for INYB and bringing in teachers from Europe and elsewhere so that the young dancers could broaden their experience. One guest choreographer remembers declining Lewis’s first invitation to make a new dance for INYB until Lewis convinced him to at least come and watch a show, at which point he immediately agreed to choreograph, cementing a long-standing relationship with the company. Many who worked with Lewis remember her persuasiveness, especially when it came to giving young dancers a chance on stage.

She was equally determined to secure funding for INYB, and her role included writing grant applications and finding the money to pay for live music during performances, a costly proposition but one to which she held firm. Beginning in 2012, INYB’s annual spring shows included eight chamber musicians, often performing original scores. She regularly commissioned these original dances and musical compositions so the dancers could experience the entire creative process.

Lewis’ commitment to her art form spread beyond INYB. For several years she worked as a guest teacher at the Dublin-based College of Dance, having previously worked as the ballet mistress for Cork City Ballet and later Ballet Ireland. In 2009 Lewis became one of the founding members of the Irish Ballet Forum, an organisation designed to unite ballet organisations in Ireland, in the spirit of helping disparate groups work together.

Her inclusiveness extended to visiting dancers and companies, as she was often seen at dance, film and theatre openings. Her own theatrical career also extended to theatre, radio and film.

Nevertheless she remained exceptionally devoted to INYB, urging anyone to buy tickets to upcoming shows, imploring critics to review the shows “because the dancers have put their heart and soul into them”, as did she.

Katherine Lewis died of a brain haemorrhage while on holiday in Lanzarote with her close friend Alan Foley, artistic director of the Cork City Ballet. She leaves behind a large family of dancers and colleagues in Ireland’s dance community. She is survived by her mother Bridie and three brothers, Alan, Ian,and Michael.

Readers on overseas travel: ‘I am responsible enough to go and manage the risk of Covid’
9