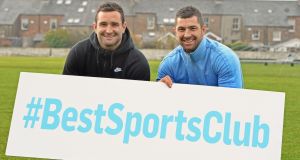 You have so far nominated 352 clubs, representing more than 40 sports, for the Irish Times Best Sports Club in Ireland competition, which began a week ago and is accepting submissions until mid-May.

Kickboxing is the sport with the most nominations (for 49 clubs), followed by Gaelic football (42 nominations), soccer (36) and rugby (30). Athletics has 24 club nominations, and boxing 20. Eighteen of the nominations came from hockey clubs and 16 from hurling clubs.

In its hunt for the best sports club in Ireland The Irish Times is inviting members of the public to write a short pitch for a club they know and love, at irishtimes.com/bestsportsclub.

The winning club, to be announced in June, will receive €5,000, with a further €1,000 for another deserving entrant, both provided by the National Dairy Council, the competition’s sponsor.

The winner will be decided by a panel of judges chosen by The Irish Times, who will make their decision based community involvement, club spirit, sporting achievement and other criteria.

Among the nominations so far are the following contributions:

“In a county where hurling is all-encompassing, to find a club that breaks the mould can be difficult. Yet that is what Tipperary Knights basketball club does. Always successful with girls, it has now put the men’s underage game as serious contenders in the home town of the GAA.

“That the local CBS boys’ secondary, better known for its Harty Cup achievements, has won two all-Ireland underage basketball titles this year, with almost all the players coming from Tipperary Knights, really sets the club in context.

“Parents, who initially may have been sceptical about what benefits basketball could bring their sons, have been won over to its athleticism, deeply thought tactics and quick decision-making.

“But it’s not just the players’ sporting prowess that deserves praise. Their off-court behaviour is a beacon to both the townspeople and underage players in other sports and clubs. In this Tipperary Knights is supremely successful.

“Portobello Ladies is a football club for the players by the players. We are a ‘culchie club’ of girls from around the country but living in Dublin, so we don’t have a depth of volunteers to run the club. We do almost everything ourselves, from washing jerseys to attending county board meetings.

“Portobello, to me, means family, support and friendship. Moving from a small rural village to Dublin, where I knew nobody, was daunting. I made the difficult decision to transfer from my club in Tipperary to Portobello, and it was the best decision I ever made. We are also one of the most international adult teams in Dublin, having welcomed girls from Poland, the US, Canada and Brazil.

“Portobello may not be the most successful club in Dublin, but we are competitive in Division Four and are making strides. We are targeting some silverware this year, with our eyes on the championship trophy, and because we are the best club in Ireland I think this band of sisters will get over the line.”

The trained GP who can’t work in Ireland, despite the shortage
9

Our neighbour says he has permission to build on our boundary wall. Can he?
10

Róisín Ingle: I hated those wearable ‘fitness yokes’. Now I’m one of those people
Real news has value SUBSCRIBE