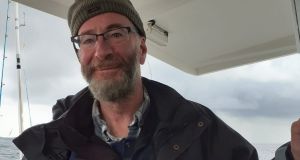 Fiachra Ó Marcaigh: At the age of 25, he was appointed to the board of the weekly magazine Anois, and he would be associated with Irish language publishing for more than 30 years.

Fiachra Ó Marcaigh, who has died at the age of 57 following a short illness, was a pioneering journalist who specialised in writing in the Irish language and covering new technology. But his professional accomplishments were just one part of a life well lived, during which he earned the affection and respect of many friends and colleagues for his warmth, wit, kindness and keen intelligence.

Fiachra was far ahead of his time in grasping the significance of the technological revolution which is now transforming media. In the 1990s, he helped lead The Irish Times’s transition to a modern production system, while simultaneously breaking new ground through his co-editorship with Michael Cunningham of Computimes, the first Irish newspaper section exclusively devoted to tech. Following his death, columnist Karlin Lillington recalled on Twitter that “Fiachra was kind, encouraging, razor-sharp & funny. I owe him so much – as a mentor and editor, as a colleague and friend.”

He moved on from The Irish Times to work with the ambitious but short-lived Dublin Daily newspaper before co-founding the media consultancy group Amas, where he was especially proud of his work on Science Week, Smartfutures and other educational projects promoting Stem to primary and secondary pupils.

Prior to all of this, though, he was immersed in the Irish language. At the age of 25, he was appointed to the board of the weekly magazine Anois, and he would be associated with Irish language publishing for more than 30 years. He inherited his love of the language from his father, the writer and publisher Caoimhín Ó Marcaigh. From his mother, Aingeal, he also inherited a deep affection for west Donegal. But he was never short of other interests or pursuits, from motorbikes to Tai Chi, flyfishing to clay pigeon shooting. He also spent many hours coaching teams at Cuala GAA club.

Fiachra was educated in Coláiste Mhuire, Parnell Square and studied psychology and English at Trinity College Dublin, where he met his future wife, Jessica Classon. Like many of their generation, the couple went to Australia after graduation; unlike most, they returned and turned that experience into an advice book for other would-be emigrants. He also worked with documentary filmmaker Alan Gilsenan on films including the groundbreaking The Road to God Knows Where.

He and Jessica had three sons, Fionn, Malachi and Oscar, who each read selected poems, chosen to reflect their father’s love of the Irish language and of the natural world, at the Service of Remembrance held in Our Lady of Dolours Church, Glasnevin on November 30th. The packed church was testimony to the many lives Fiachra had touched over the years. Eulogies were given by Dermot Quirk and Conal Devine, old schoolfriends from Coláiste Mhuire,who spoke of how family and friends were the centre of Fiachra’s existence and his wife and children his crowning glory.

Fiachra died on Saturday, November 23rd in St Vincent`s Hospital Dublin surrounded by his loving family. He is survived by Jessica, Fionn, Malachi and Oscar, his mother Aingeal, brother Aengus and sister Sinead.

What sold for about €385,000 in Kilmainham, Glenageary, Howth and Beaumont?
3