Love it or loathe it, panto takes huge effort. For Twink, 38 shows in a fortnight mean there’s no time to lose in the rehearsal room 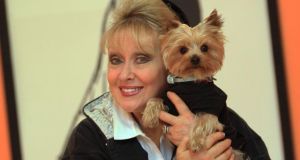 What fresh hell is this?: Twink at rehearsal with her dog, Teddy Bear. Photograph: Nick Bradshaw

Rehearsal rooms are grim places, and pantomime is especially tough. (Oh yes it is.) The cast of Aladdin, which will open at University Concert Hall in Limerick next Friday, are in their second week of rehearsal. Kamal Ibrahim, who is from Limerick, as well as being a former Mr World, and an RTÉ Lotto presenter, is playing Aladdin. Twink – show-business stalwart, tabloid fodder and international judge of cake- decorating competitions – is playing his mother, Widow Twinkee.

Aladdin is nervous about meeting Princess Jasmine. (This is understandable, as she is being played by Leanne Moore, the You’re A Star winner who is now a reporter on the TV3 programme Xposé.) “Ah, is it your first time?” asks Twink. “No,” says Aladdin. “I’ve been nervous before.”

You either like this kind of joke or you don’t – some of us love it, actually – but, regardless, you have to admit the sheer effort of pantomime. This company will do 38 perfomances in two and a half weeks, with only Christmas Day and New Year’s Day off. Their first show of the day starts at 10am.

Twink has thrown in some local references for Limerick – “What in the name of the divinely beautiful Celia Holman Lee . . .” – and some just for fun: “Oh, sweet suffering Mary Byrne.”

There are ghostly sound effects and, everywhere, references to television, including one to Game of Thrones that I just don’t get.

Twink doesn’t get a lot of the television references, either. She watches quizzes, programmes about forensic anthropology, and the Discovery channel. She doesn’t watch Tina Fey or Jo Brand. “When I was writing pantomime I had two small kids, and I was watching everything,” she says. She describes herself now as unapologetically out of touch.

Twink is sitting at the side of what will be the stage, and she has to jump out of her chair every now and then to interject, as the action rolls on without her. She springs up every time, even though she is recovering from a fall in which she broke bones in both her hands, and everything still hurts.

Aladdin is courting Princess Jasmine, with his mother giving him instructions through an earpiece. So Twink is Cyrano de Bergerac as well as – and this is a bit disturbing – Mrs Brown. At the end of this scene, of course, Aladdin’s earpiece malfunctions, and Twink is left shouting “Abort! Abort!” to him in vain.

Unfortunately, but understandably, Twink doesn’t approve of political jokes in pantomime – they annoyed her even as a child – and she’s also a bit ambiguous about feminism. Instead the scene ends with Twink saying, “Sacred Heart, he’s gone rogue,” which is funnier than it looks in print.

Engulfed by controversy
It is impossible to watch Twink, otherwise known as Adele King, without thinking of all the controversies that have engulfed her. As Aladdin approaches Princess Jasmine, Widow Twinkee tells him, “Just because she’s a princess with buckets of money, and we’re stony broke and living above a laundry, there is no pressure on you to seal the deal.”

So we’re back to Twink’s problems paying her mortgage, and only pulled out of that appalling vista by her saying, “And that’s from the heart of your mother’s bottom. I mean the bottom of your mother’s heart.” Boom. Boom. “You’re crazy,” says Aladdin. “That has never been proven,” says Widow Twinkee, magnificently.

Two of the cast, Trevor O’Connell and Richard Lynch, come too far over to her side of the stage, where she’s meant, presumably, to be hiding in the undergrowth. “You’re in the bushes now, dear,” Twink says with a smile.

It would be great to see her playing against someone as clever and as dirty and as angry as she is. But who is that person?

She knocks over her cup of coffee, and people vanish to fetch kitchen roll to mop it up. “You loser!” says Twink, and it takes a minute to understand that she is talking to herself. “I knew it would be me.”

Twink is saying that there are too many delays in the scene, which is full of interruptions and therefore very difficult to play.

“It’s harder to learn than Beckett. I was once in a terrificially funny play called Dirty Dusting,” Twink says to no one in particular. It is awful to think that she has to explain what Dirty Dusting was, or is. “With two wonderful actors, Áine Ní Mhuirí and Eileen Colgan. It was just two and a half hours of interjections. Very, very difficult.”

She has been on a diet of black coffee, apples and chewing gum for months, and has lost two stone. No other food. No alcohol. And Twink loves her food. “I’m a bon viveur.”

She is that rare thing, an untrammelled female personality. She could play any of Dickens’s magnificently individual females. In fact, she says, “I’d kill for a dowager part, you know, a Maggie Smith part.”

When I ask about being troubled and always getting into trouble – the answering-machine messages to her ex-husband, David Agnew, the row with Linda Martin and so on – the fine-boned face looks so stricken that I feel a complete heel.

“I don’t court drama or trauma or tragedy,” she says. “If I could time things in my life like I can time things on stage . . . As Dorothy Parker said, ‘What fresh hell is this?’ ” In the past she has bounced back from all these events. “But now I find the bouncy mat isn’t there, and it’s not getting any easier.” She is peaceful in her own environment, she says. Her dogs are her mates.

She can be quite regal. She admits that she said horrible things about Linda Martin when they were touring with Menopause the Musical. “I said to her, ‘The only regret I have is the manner in which you heard it.’ ”

Twink’s finances, she says, have been trouble since she lost a lot of money more than 20 years ago. “I blew two international chances . . . The price was irregular work and vile fees.” At her age her earning capacity is down, she says. “But I’ll always struggle.”

Words can’t describe how much she despises the showband era, she says. And Twink sang with a showband. When people call her about doing showband retrospectives, “I say, ‘Listen, pal. I hated it the first time round.’ ”

Twink doesn’t really understand how she’s still in show business. Maxi, Dick and Twink retired when she was just 18. She still sees Maxi – “I love her.” Twink could have gone to college to study medicine. In show business she was never ambitous. “I’m more ambitious now,” she says.

‘We would go back in a heartbeat’: Readers share their best family holidays
6