Tesla’s Model 3 will be instrument-free

Elon Musk has said a great deal about the upcoming Model 3 saloon. 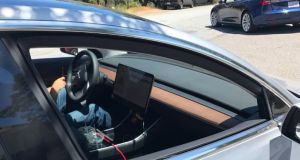 Tesla Model 3: test car seems to indicate the interior will feature a big central screen, but with no conventional dash or dials. 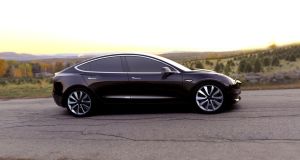 It’s Tesla’s Model 3, more than any other car, that’s currently driving the firm’s hugely-inflated share price which has seen the company rated as being worth more than the likes of Ford or General Motors, which outsell it by many millions of cars

Elon Musk has said that  the upcoming Model 3 saloon will raise Tesla’s annual production numbers to as many as 500,000 cars. He has said that it will be smaller, more affordable, but less technically advanced than a Model S. And he has said that it doesn’t really need conventional instruments or buttons.

On at least that third point, Musk seems to be true to his word. With a full reveal of a production-ready Model 3 not due until July, indications are that the new car will keep the prototype’s big central screen, but with no conventional dash or dials.

The test cars suggest the cabin is all but button-free, and there is no instrument cluster as you’d expect to see. That had lead to some speculation that the Model 3 would instead use a projected digital heads-up display on the windscreen, but there’s no sign of that either. Musk himself has said that “the more autonomous a car is, the less dash info you need. How often do you look at the instrument panel when being driven in a taxi?” That would seem to indicate that Tesla is planning to expand its oft-controversial semi-autonomous driving tech for the Model 3, in spite of a great deal of bad publicity surrounding the system as used in the existing Model S and Model X.

It’s the Model 3, more than any other car, that’s currently driving Tesla’s hugely-inflated share price which has seen the company rated as being worth more than the likes of Ford or General Motors, which outsell it by many millions of cars. Investors are still keen on Tesla’s stock though, saying that it’s the Model 3 – more affordable and more likely to generate big sales than the larger, more expensive lineup that is currently on sale – that shows Tesla’s true potential.

“Partly, the Tesla versus Ford valuation is a clear judgement on future potential but of course it is also over-hyped,” Matthias Holweg, professor of operations management at the Saïd Business School, in the University of Oxford, told The Irish Times. “Still, in my view, it’s justified when considering which company has the greater ability of addressing society’s future mobility needs. Most car firms have tried their luck with mobility services, car sharing, and the like. Generally this has ended in tears, and car firms revert back to what they do best: design and make cars. In my view Ford needs to concentrate on pushing hybrid, electric and fuel cell developments now, and gradually wean itself off the SUVs and light trucks sold to the US market, which currently generate most of its profits.

“However, the barriers to entry into the car industry remain very high, so incumbents are still best placed to change their product offering towards alternative powertrains, and exploit their manufacturing, distribution and service networks to capture this demand. Tesla has a 30 per cent market share of electric cars in the US, which is impressive, yet globally, across all vehicle segments, its market share is less than 0.1 per cent.”

Other analysts reckon Tesla remains a tantalising purchase. Speaking to Forbes magazine, Baird Equity Research analyst Ben Kallo said “we do not believe there are any companies of comparable market cap which offer a similar top-line growth profile. Additionally, with several upcoming catalysts, we believe it will be increasingly difficult to short the stock.”

Tesla could also be about to lose a major potential rival. Chinese-backed electric car maker Faraday Future had seemingly been following the Tesla model to the last detail – make only electric cars, make them very fast, name them after a famous pioneer of electric science, and build a huge factory for batteries in Nevada. However, while Faraday Future read the script, it has failed to follow through in the performance. Faraday’s parent company Le Eco is owned by one of China’s richest men, Jia Yueting, but just this week Yueting and Le Eco have had to be essentially bailed out with a multi-billion dollar investment by Chinese property developer Sunac China Holdings.

According to Automotive News China, Sunac’s Chairman, Sun Hongbin, is as hard-nosed as businessmen come and recently returned from a fact-finding mission to the US saying that he had no confidence in the electric car market as a money-spinner, and said that he would not simply throw money at Faraday Future to get the project back on its feet.