Saying farewell to the beloved actor, who died this week aged 89, in the best way possible; by remembering his iconic car chases 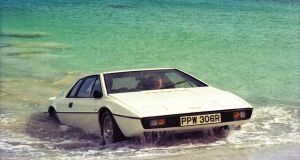 Legend has it that Lotus, so keen to get their new Giugiaro-designed wedge into a Bond film went to the simple expedient of parking one outside the famed Pinewood studios and waiting for the producers to take notice.

In a week already replete with tragedy came the news that Sir Roger Moore had passed away at the age of 89, following a brief struggle with cancer. Moore was not the best Bond in history, something he would have admitted himself, but he might have been the nicest actor to have played the role (although I’m sure George Lazenby, Timothy Dalton, Pierce Brosnan and Daniel Craig are all lovely. Not Connery though – grumpy old git by all accounts). Moore went on to parlay that niceness into his roles as a Unicef ambassador, becoming not only a national treasure but a truly global one.

For any of us born in the 1970s, he was our first Bond, and while the portrayals of others may be sexier, more action-packed, or more actorly, who could argue that Moore’s time in the role saw 007 at his most charming, his most witty, his most downright funny? Moore saw the inherent ridiculousness in the character from the off (can you imagine a real-life intelligence officer walking into a casino and announcing his last-name-first-name-last-name to all and sundry?) and decided to have fun with the role, which he did for a successful 12 years.

And those dozen years saw some of Bond’s most iconic four-wheeled moments, including the best one of all time, perhaps. Our sympathies go out to Sir Roger’s family and friends, and as fans ourselves we are bereft. But we’ll always have the clips, the movies, and the memories, and no one else could so effortlessly combine opposite lock with raised eyebrow.

Legend has it that Lotus, so keen to get their new Giugiaro-designed wedge into a Bond film went to the simple expedient of parking one outside the famed Pinewood studios and waiting for the producers to take notice. It worked, and so the Esprit S1 was given a co-starring role in the epic 1977 production of The Spy Who Loved Me. It’s unquestionably Moore’s best Bond film (even if the plot is more or less a direct lift from Thunderball) and it’s his best acting in the role too (his reaction when his late wife is mentioned is genuinely moving).

And it’s also Bond’s best car chase, by far. It has everything: machine-gun toting helicopters, rocket-launching motorcycles and a white, mid-engined car that magically turns into a submarine. Lotus test driver Roger Becker did a lot of the driving when the movie’s stunt crew couldn’t get the Esprit to slide cleanly (pulling donuts around the Sardinian roads under a swooping helicopter). Factually accurate? Hardly. The bad guy’s Ford Taunus (a Cortina by another name) would never have kept up, and the Esprit would probably have done its head gasket, but still. Submarine. Nothing has been cooler since.

The Hornet is a forgettable car from a forgotten car maker (the American Motors Corporation, also makers of the Gremlin and Pacer, and once owned by Renault) and the addition of the red-neck sheriff from Live And Let Die is silly (Sheriff J W Pepper, played by Clifton James, who passed away recently) but it does have THAT jump. An insane piece of stuntwork which today would presumably be done in CGI with a fake Vin Diesel at the wheel. The stunt was designed and created by an American showman called Jay Milligan as part of his own arena-based car shows.

Bond producers Eon Productions bought the rights to the trick, and asked the Cornell Aeronautical Laboratory and its expert Raymond R McHenry to computer-simulate the 270-degree barrel roll and work out how fast you’d have to go and where you’d land. The bridge set was built on location in Thailand, and British stunt driver Loren Willard drove the Hornet coupe for the shot. Needless to say, there were copious ambulance crews and paramedics on standby though it went flawlessly, and the shot was got in one take.

Think about that the next time you watch another CGI-crash-fest in The Fast and the Furious. We could have done without the slide-whistle effect, but Moore’s “ever heard of Evel Kneviel?” line is a nice touch.

Moore’s Lotus Esprit Turbo didn’t get to do much in For Your Eyes Only, meeting a loud end at the hands of a nameless henchman. Lucky then, that Carole Bouquet (candidate for the most beautiful Bond Girl ever?) and her Citroen 2CV were parked nearby, giving Bond the chance to make good his escape. Of course, this is no ordinary 2CV. The standard model being so slow, the stunt-driving team of Reme Julienne (who had also created the iconic Mini car chase for The Italian Job) modified the car to use the bigger, more powerful engine from the GS saloon. Thus equipped, the 2CV was able to give a pair of black Peugeot 504 saloons the slip, in part thanks to using its long-travel suspension to careen down steep, vine-filled hillsides.

You could say that the 2CV is the coolest Bond car ever, even if Aston, Lotus and BMW might care to differ. None of those was quite so affordable though, and you could buy a replica 2CV 007 Edition from your local Citroen dealer, complete with fake bullet holes stuck on the doors. Or, if you were younger or a little less well-heeled, you could buy a toy one from Corgi.

Filmed on the Nene Valley Railway near Cambridge, which was doubling for East Germany in the movie, the overriding conundrum in this moves is why a Soviet general is riding around in a capitalist Mercedes. That, sadly, is never answered, but Bond does steal the official, flagged car from General Orlov (played with glorious malevolence by stage actor Steven Berkoff) to chase down a circus train carrying an atomic bomb. Don’t let the convoluted plot (or the occasional sighting of a Volga M-24 saloon, placed in the scene for some four-wheeled Soviet verisimilitude) distract you from some excellent stuntwork though, as the Merc, sans tyres, is driving along the train tracks. Bond (or his stunt double) leaps from car to moving train as the car is obliterated by a passing express. Incidentally, watch the stuntman playing the fisherman as the wrecked Mercedes plunges into a lake – he only just gets out of the way in time.

The Renault 11 is not the most exciting car in history, it must be said, and is possibly the least-deserving winner of the European Car of the Year award. But we’ll always hold it dear to our hearts, simply because Bond destroys it in A View To A Kill, his last film outing as Bond. Pursuing an assassin who has just parachuted off the Eiffel Tower, Bond hijacks a taxi and proceeds to cut a destructive swathe through Parisian traffic. Once again, the stuntwork is co-ordinated by Remy Julliene and his team, and involves leaping over buses, ripping off the roof, and even splitting the car in half at one point.

The chase gets bonus kudos for featuring possibly the least-convincing stunt doubles of all time, with some of the least-convincing wigs ever. All in good fun though, and of course Moore manages to complete the chase with his tuxedo unsullied and nary a hair out of place. Sheer class.