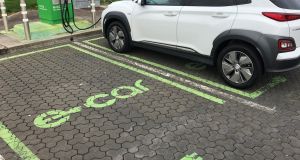 The ESB has announced that it’s going to introduce pricing for its network of slow 22kW electric car chargers. Charging for charging had already been introduced for the national network of rapid 50kW chargers, but until now the slower chargers, usually found installed at kerbside parking spaces, have still been free to use.

The switch to payment for slow charging is part of the ESB’s €20 million investment in the national charging network, which the company says has seen 150 standard chargers have been replaced in 26 counties to improve charger reliability - often a bugbear of electric car driving.

The charges, says the ESB, will support the ongoing expansion and maintenance of the public charging network.

There is a two-tier pricing structure, as there is for the faster 50kW chargers. For pay-as-you-go customers, the cost will be 26.8c per kW used. Regular users can pay a €4.60 monthly membership fee which reduces the cost to 23c per kW. The difference means that a pay-as-you-go customer would spend €16.61 to fully-charge (from flat) a car with a 62kWh battery (for instance, a Hyundai Kona Electric) or €14.26 under the subscription plan.

If you are using an ESB 50kW charger, that costs 33c per kilowatt-hour to use. With a monthly subscription, the rapid-charger price drops to 29c per kW.

The ESB says that, since it launched charger pricing last November, some 11,000 people have signed up to use the membership service.

Niall Hogan, head of ESB ecars, said: “We all know that climate action is a priority for all of us and that electric vehicles play a key role in the move to clean, low-carbon transport. That’s why ESB is committing €20 million to upgrading and expanding the public charging network for EVs and why we’ve introduced pricing on a phased basis to support that investment in clean transport. Drivers are already seeing the benefits of this investment with significant improvements in the reliability of the national network.”

Even with the new charges, the ESB estimates that driving an electric car still offers significant savings, with a potential saving of 35 per cent on a 100km journey, compared to a conventional 1.5-litre diesel car.