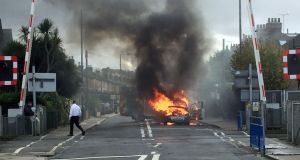 Opel is recalling more than 8,000 cars in Ireland for the second time over fire risk fears.

The German car maker originally asked owners of the Zafira B models, which were built between 2005 and 2014, to return the vehicles for repair last year due to a potential fire risk linked to the heater fan and ventilation system.

On Thursday, Opel Ireland said in a statement after a consultation with the Driver and Vehicle Standards Agency it was once again asking the model owners to return their cars for repairs.

“These improper repairs, which may have been conducted without the owners’ knowledge, can lead to overheating of the system’s electrical components and the potential for a fire,” it said.

“After extensive investigations we have decided to go further and improve the overall robustness of the system.”

It said letters would be sent to the car owners on a staggered basis from August with details on the second recall and the work on the car would be done free of charge.

“Owners of vehicles which have not yet had the initial recall completed should still bring their vehicles to their dealership to have them returned to their original condition,” it said.

Opel, one of Europe’s largest car manufacturers, is preparing to recall 240,000 cars across the continent.

Germany is to open an investigation into Opel after claims that the company uses software in two diesel models to manipulate emissions.

As a result, federal transport minister Alexander Dobrindt said his officials “had doubts over whether the procedure described is in keeping with motor protection”.

Last week Der Spiegel said tests it carried out on the Opel Astra and Zafira models showed they emitted around 11 times the legal limit of noxious nitrogen oxide.

Any concerned Irish customers can call Opel customer assistance on (01) 533 9818 or contact their Opel dealership for more information.