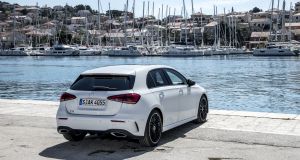 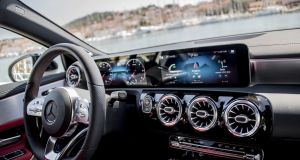 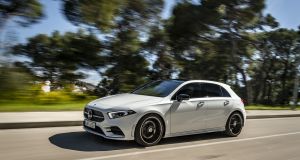 The Mercedes-Benz A-Class may look like a smart hatchback but it’s also a preview of the future of the car. At least that’s the promise.

Let’s start with a few examples of the latest tech before we even take to the road. The new A-Class can be opened and started using your smartphone or a NFC (near field communication) card. So you swipe your phone on the door handle to open and by placing it in the right spot on the central console, you can also start the car.

Or how about sharing the car with up to 25 friends or family members via a new smartphone app. The sharing feature lets others open or lock the car with their phones and activates a spare key kept in the car.

True, it’s only benefit is that you don’t need to meet them to hand over the key and they do need to be a named driver on your insurance, but it’s a clear step towards shared usage and perhaps ownership.

Consider, for example, a company car available for use to all staff, managed through a simple smartphone app. Or an apartment building offering use of a shared A-Class.

Then there is a new feature that identifies vacant parking spots in your area. While other firms offer similar systems using data from car park management firms and local councils, this one will also access data provided from other Mercedes owners.

Using the park-assist camera systems on the latest generation of Mercedes cars, it gathers anonymised data on vacant spaces as the cars pass them. This information is then available to other Mercedes owners in the area looking for parking.

Also, if another Mercedes vacates a nearby space, it is shown as vacant for up to 90 seconds after they depart.

For in-car features, how about a new 10.25in touchscreen display. And if you don’t want to bother stretching for the screen – or using the mix of buttons and touchpads also provided – you can always revert to the latest voice control system, operated in the same way that Amazon’s Alexa or Apple’s Siri.

Just call out “Hey Mercedes” and you can give it general instructions or ask it questions.

Mercedes says that unlike other systems, this one doesn’t require you to learn off the commands. Instead, it is designed to interpret everyday speech. Unfortunately, it’s as annoying and inaccurate as both Alexa and Siri are outside the motoring world.

Finally, the firm has adopted augmented reality features into its sat-nav, whereby a live image of the upcoming turn appears on the centre screen with arrows and relevant road signs overlaid on the image. It’s impressive, and hopefully points to a time when such augmented reality imagery will appear to float in the windscreen.

It’s an impressive array of tech, all offered on the new A-Class when it lands here this summer. And there’s more. Using an array of cameras and sensors, the A-Class has the sort of steering-assist system you would expect to see on the flagship S-Class.

That’s probably enough about the tech for now: what about the car? What we have here is a spacious five-door hatch that in some ways resembles a small estate car, given its length.

Measuring in at 4.4 metres, it’s a noticeable 120mm longer than the outgoing model. At the same time there has been a minor height increase of 6mm, but it’s still a low-slung sporty hatch and not the high-roofed people carrier that some rivals are resembling these days.

Mercedes biggest space boast about the new car is that the boot can now take a set of golf clubs, with 370 litres on offer, something the outgoing model couldn’t manage.

There’s an overall sense of quality from the new A-Class interior. In the past, A-Class buyers could understandably feel short-changed from the entry-level cars, especially when they compared them to mainstream lower-priced rivals. Now, however, the A-Class delivers on its premium promise.

Engine options comprise a 1.33-litre petrol, a 2-litre petrol, or a 1.5-litre diesel. These will be offered with different power outputs. Initially at launch, there is the A180d, powered by the 1.5-litre diesel putting out 116bhp and with 260Nm of torque. The engine is sourced from a deal with Renault Nissan and it’s a smooth motorway runner but it is quite noisy when idling.

As buyers no longer consider diesel the automatic engine choice, there is a strong case to be made for the 1.33-litre petrol engine, in terms of performance and driving pleasure.

At 163bhp in the A200 version, it has significantly more output, yet the torque difference against the diesel is only 10Nm, at 250Nm. While the diesel’s pulling power is noticeably better at low revs – helped by the latest seven-speed automatic transmission – the petrol is the more refined and agile engine overall. After two days of testing both on similar roads, it was the engine we’d opt for out of the two.

Even in terms of emissions, the A180d diesel comes in at 108g/km, while the A200 petrol is just 120g/km. That’s a €10 difference annually under the current motor tax bands.

Finally, there is the 2-litre 224bhp A250 petrol, version, but we don’t expect to see too many of those on Irish roads.

Mercedes has opted for a new torsion beam rear suspension for the A-Class, at least the lower-powered versions. The firm had been reticent about using this format in the past, claiming it comprised ride quality. However, its engineers are now convinced they have the mix right, though not for all buyers.

Opt for the more powerful A250 – or even the larger 19in alloys on a smaller engine variant – and you get the more sophisticated four-link rear suspension. According to Mercedes engineers, this is because buyers of these cars expect a more dynamic drive, but it suggests they are not entirely convinced of the torsion beam set-up.

While the A200 and A180d arrive in Ireland at the end of May, lower-powered entry-level A160d and A180 petrol variants are due by October in time for 2019 sales.

The new A-Class saloon will land in Ireland at the end of the year. While Mercedes Ireland sales manager Ciaran Allen predicts full-year sales for the hatchback of 500 annually, it’s expected the saloon will add another 500-600 sales annually, making the A-Class a serious premium player, ready to challenge the dominance of Audi’s A3.

Prices have yet to be confirmed but we expect they will start marginally ahead of the current A-Class range, which begins at €27,000 for the entry-level petrol and €32,000 for the diesel, although both are carrying €2,000 discounts at present.

In terms of the in-car tech, three trim levels are offered, with the Advantage pack offering a 7in digital screen for the driver, and a 10.25in touchscreen system for infotainment. Step up a level to Premium and you get two 10.25in screens. A top-end Premium-Plus pack adds yet more tech and gadgetry. Prices for the packs have yet to be confirmed, but to remain competitive we might expect them to start in the region of €1,500.

Alternatively you can opt for trim levels on the car, starting with an entry-level Style with 16in alloys, or stepping up to a new mid-grade called Progressive. The top-end remains the AMG version with the larger 18in wheels. The price walk in each of these may be in the region of €2,000 or so.

Taking the previous prices as a rough guide, buyers spending €30,000 or thereabouts are probably best to opt for an A-Class petrol with Premium tech pack and Progressive trim, getting the best of most worlds.

Admittedly, that seems like a lot to spend on a small family hatchback even with a premium badge, but it’s what buyers are paying for rivals like the Audi A3 or the BMW 1 Series.

The new A-Class is more spacious than it appears and offers more cutting edge tech than you’d expect in a car of its size and price. Tech like this is normally launched in the flagship and only trickles down to the entry level after several years.

And it’s only the first taste of a major product assault by Mercedes that will see eight new compact models on the market by 2020.

Expect to see a lot more Mercs on Irish driveways in the years to come.