Hyundai Santa Fe PHEV: Bold engineering, plus features that would be at home on a Mercedes 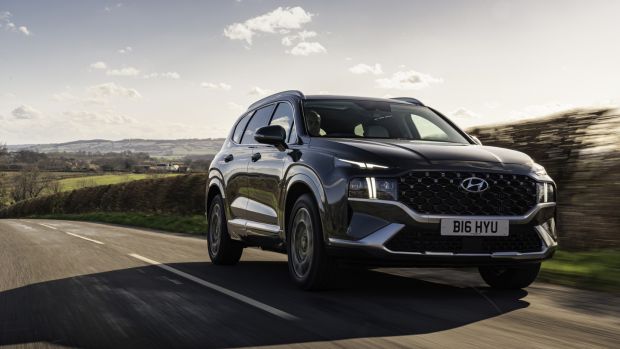 The Santa Fe has always been an outlier in the Hyundai line-up. Back when the brand was still considered a discount buy – the Dacia of its time – the Santa Fe was something very different. A family car for the middle classes, a quasi-premium family crossover that looked better than the boxy people carriers and yet relatively affordable. It adorned the driveways of many Irish households as the Celtic cub grew into a tiger.

As its owners stashed their Bacardi Breezers in the boot, ready for the barbecue to celebrate their big property play in Bulgarian apartments, they proudly praised their new Santa Fes. No mention was made of Hyundai.

It became a brand in its own right, a one-model middle-class Korean family car that bore little relationship to the rest of the brand, at least in the eyes of many owners. In a way, its success left room in the Hyundai brand for a replacement SUV, heralding the arrival of the Tucson.

At the time we thought it was a mistake, cannibalising the same market, but the big branding brains in Korea got it right: people regarded the Tucson as a Hyundai and the Santa Fe as, well, something more. Don’t mention the H word.

These days the differences between the two models are more apparent, particularly when it comes to spaciousness and price – the Tucson plug-in hybrid starting at €10,000 less than the equivalent Santa Fe, for example.

To appreciate just how far the Santa Fe has come in the last 20 years, you need only park it next to one of the hundreds of first-generation cars still rumbling around Irish roads. An aged but well-maintained 2003 version looked like the motoring equivalent of a corduroy suit.

What you got then was spacious practicality with SUV looks. Now you get something with comfort features that fit firmly in the luxury set.

The Santa Fe is also making some bold engineering statements. The styling and design showcases some high-end production techniques – like sweeping side panel creases – that 99 per cent of owners will take for granted, but would have been unthinkable in the mainstream brand only a few years ago.

That’s also on show from the underpinnings, which offer a sharper yet more comforting suspension – no mean feat.

Up front, the trapezoidal grille is starting to give Hyundai some real character in the crossover set. This is an imposing SUV with luxury trim and a plug.

Practically speaking, there’s plenty of bootspace and rear-seat legroom, and the flat floor delivers a proper usable middle seat for adults. The third row is also spacious for school runs.

In keeping with the family needs these days, every surface seems to feature a USB charging point.

But it’s the quality of the finish that impresses most about the interior, with smart leather seats and the sort of trim you’d expect to find in a much more expensive Merc.

Hyundai has opted for buttons over a big touchscreen and it works well. Even the automatic gear options are chosen from a cluster of buttons. What’s left on the 10.25-inch touchscreen are the sort of entertainment functions and information features that you don’t necessarily need to engage with while driving.

Power comes from a 1.6-litre 133kW petrol engine supported by a 67kW electric motor that delivers four-wheel drive and a 0-100km/h time of 8.8 seconds. That’s relatively fast for a car of this size. A choice of drive modes are also on offer from the all-wheel drive system, though acceleration – or off-roading – is not what the Santa Fe is about; this car is about comfort.

That’s clear when the car runs solely on the electric motor when it is running off the 13.8kWh battery pack. The WLTP official range from a full charge is 58km, more than enough for suburban motoring and most people’s commutes. Spend enough days commuting only on electric and the noise when the engine intervenes can seem very intrusive. In truth, it’s much less than you get from any diesel.

When you consider the price is €50,000 (after grants and rebates) for the PHEV with Executive Plus trim, while the diesel starts at €60,895 – and €62,895 for the four-wheel drive version – it seems like a hard sell to lure a buyer away from probably their first real taste of the electric future.

Add in the fact that the car means you qualify for grants towards the purchase and installation of a wallbox charger at your home – a useful addition to any house – and unless you spend all your time commuting from Donegal to Dublin, then it’s hard to make the case for diesel.

The greatest rival to this car is its Korean twin, the Kia Sorento.

Like the Kia, the Santa Fe PHEV comes in two trims – with prices for the higher-spec version at €53,945.

You need to be pretty expert at nit-picking to make the call between these two, and it’s likely the decision on which to choose will come down to the proximity of the dealer and the trade-in deal on the table.

For those in the market for spacious seven-seat family transport with a plug, the Koreans have the lead right now. While €50,000 is well above many motoring budgets, there’s likely to be a healthy demand for these cars in the used market in the years to come. For well-heeled motorists, the Santa Fe matches all the family needs while delivering all the comfort features you’d expect from a premium brand.