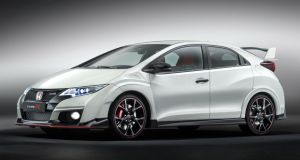 Will front-wheel-drive hold it back against the Focus RS? 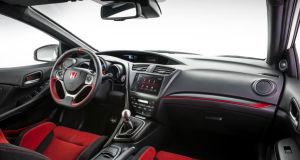 Interior gets Alcantara seats and a ’+R’ button to make everything go faster.

Well, it’s finally here. Following a process of drip-feeding facts, photos and rumours to the world for what seems like decades, Honda is finally giving us a full and frank look at its most extreme hot hatch ever – the new Civic Type-R.

Making its debut alongside the new NSX supercar at the Geneva motor show, the Civic Type-R gets some serious power to put through its front wheels. The 2.0-litre turbocharged VTEC engine pumps out a more-than-adequate 310hp and 400Nm of torque. Even with a turbo, the engine has a lofty 7,000rpm which should at least give it some of the screaming nature of previous naturally-aspirated Type-R models.

Its 0-100kmh time is quoted at 5.7secs, which Honda reckons is the fastest for a front-drive hatchback, but it’s unlikely to be able to keep up with the four-wheel-drive 323hp Ford Focus RS, which will be getting its public debut just yards away across the floor of the Geneva Palexpo centre.

The Civic looks much more OTT on the outside than the relatively conservative Ford though, and Honda says all of the bodykit provides a proper aerodynamic effect. In fact, all of the wind-tunnel and CFD (Computational Fluid Dynamics – basically a computerised wind tunnel) work was carried out by Honda’s motorsports division. There’s an almost totally flat underbody panel, which works with a rear diffuser to help suck the Civic down at high speed. The towering rear wing works too, and Honda says it has been designed to provide actual downforce without a severe drag penalty.

Honda also says that the new qual axis strut front suspension should allow it to keep torque steer to manageable levels, and there’s a new electric power assisted steering setup that should deliver more on-centre feel than the that of the standard Civic. There’s also a new adaptive damping setup which is claimed to be able to keep the cornering flat, but the day-to-day ride comfortable. The steering, suspension and engine response are all controlled by a big, red +R button, that sharpens everything up for when you want the full, unfettered Type-R experience.

There’s also a big front splitter and side skirts, not to mention massive, distended wheel arches which cover the 19” alloys and their 235-section tyres. The Type-R is also bristling with vents and louvres, which help dissipate the no-doubt prodigious heat of that engine.

Specially developed 350mm Brembo brakes will help to keep all of that rampant power under control.

Some unique colours are going to be offered on the Civic too – as well as Championship White (an iconic Honda motorsport colour) buyers can choose from Crystal Black, Polished Metal, Brilliant Sporty Blue and Milano Red.

Honda has a lot to prove with this new hot Civic. It’s the first Type-R model for five years, it coincides with the launch of both a new NSX and Honda’s return to Formula One. And in the shape of the VW Golf R, the Focus RS and the Opel Astra OPC, it also has some seriously capable opposition. Can Honda revive its nineties fast-car glories? We’ll find out soon…