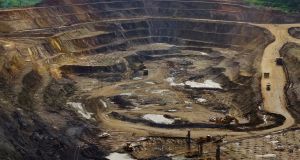 Excavators and drillers at work in an open pit at Tenke Fungurume, a copper and cobalt mine in the Democratic Republic of Congo

Suppliers to Tesla and other electric-car makers are scrambling to secure shipments of the key battery material cobalt after a group of hedge funds amassed a large stockpile of the scarce metal.

In a bold wager on higher prices, half a dozen funds, including Switzerland-based Pala Investments and China’s Shanghai Chaos, have purchased and stored an estimated 6,000 tonnes of cobalt, worth as much as $280 million, according to the investors, traders and analysts.

The stockpile is equivalent to 17 per cent of last year’s production of the metal. Increasing use of batteries with chemical forms of the metal by Chinese electric-car makers, alongside ambitious plans by the likes of Elon Musk’s Tesla, have created a fertile backdrop for speculators hoping to profit from swelling appetite for cobalt, which boosts lithium-ion batteries’ power.

They are betting that demand for electric vehicles will exceed market expectations and push the up the price as battery makers such as Panasonic, which makes battery cells for Tesla, rush to lock-up supplies of the material.

Global demand is already expected to outstrip supply this year by 900 tonnes, according to commodity consultancy CRU. It estimates demand will grow 20 per cent a year for the next five years, thanks to buying from the electric car industry whose production grew by 41 per cent last year and which accounts for half of annual consumption.

The price of cobalt, mined almost exclusively in the Democratic Republic of Congo, is already up by more than 50 per cent since November to $21 a metric pound. Prices rose to a peak of about $50 a pound in 2007, before dropping to a low of $10 in 2015.

“There’s going to be bigger demand for cobalt,” Ivan Glasenberg, chief executive of Glencore, which controls almost a third of the cobalt market, said yesterday. Each dollar rise in the price of cobalt generates about $55 million in earnings for the company.

Tesla began production at its battery “gigafactory” in Nevada a month ago, sharpening its need for the metal, according to traders. Tesla did not respond to an email seeking comment. Pala Investments declined to comment.

With few pure cobalt companies listed outside China, hedge funds have been forced to buy physical metal to express their bullish view.

Although the London Metal Exchange has a cobalt contract, it is not heavily traded. “They quite rapidly decided that buying physical cobalt was the only way to get proper exposure to the cobalt price,” one trader said.

Still, traders warned that the funds could have difficulties selling the metal for a profit, since the cobalt market is relatively small and release of new supply could quickly send prices lower.

But cobalt’s price surge has led some battery makers to buy more cobalt in the spot market, potentially further benefiting the funds who have stockpiled the metal.