‘Natural world will not steer you wrong when it comes to great, and safe, designs’ 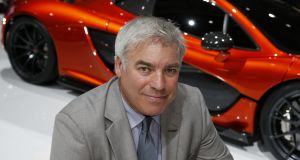 Frank Stephenson: ‘There has always been a trend to go safer and safer, and that’s not going to change.’

We are at a huge inflexion point in the history of transport and travel. The car, as we know it is, arguably, slowly dying and will eventually be replaced by autonomous pods that will roam our roads.

That may be far into the future, certainly further than we’ve been promised of late, but it will almost certainly happen. We will also, very likely, begin travelling more through the skies as compact, personal, electric aircraft start to come to the market. Once the preserve of comic books and sci-fi films, such flying cars are now being worked on by companies as significant as Toyota, Boeing, Audi, and Airbus.

There’s an issue, though. How can we, the public, a public so recently and frighteningly introduced to the concepts of robot cars that run cyclists over, and aircraft “pickle forks” that need replacing, be convinced that such things can be safe?

The answer, according to Frank Stephenson, is simple – look to nature. Stephenson is not just any old designer. Although he may lack the household-name status of such as Giorgetto Giugiaro or James Dyson, he’s been quietly, hugely, influential in the look and feel of our streets of today. Walk down the road and tell me how often you spot a Fiat 500 or a Mini. Stephenson designed both. Count the BMW X5s, too, because he designed the original 1999 version. Now check the pages of Instagram, or the bedroom wall posters of local car nuts and count how many times you see a Ferrari F430, a Maserati GranSport, a McLaren 720S – all Stephenson’s work.

Now, he’s working on the next generations of transport technology, and even giving talks at Nasa seminars as to how the work of nature should be informing the work of the modern designer more and more, especially when it comes to safety.

“In my opinion, design – not that it’s static or not moving in a good direction – but for me it’s never just been about art; never about just making things look pretty” Stephenson told The Irish Times. “It’s also not just about bringing the coolest thing you can think of to the market, it’s about so much more than that.

“For me design is about research into what we have today as a product, and how we move that product forward, make it more fit for purpose. Now, fit for purpose combines a lot of things. When you’re designing things that aren’t for public consumption – for military use for instance – often those things don’t even have to have a designer, they’re more like engineered products that just do what they do. But what I’ve noticed is that the best products always have an innate beauty to them, something that works very well does not often look ugly. We see that constantly in nature.”

That drawing on nature can lead designers down many paths. For instance, Stephenson is working on a new design of child-safety car seat, called the BabyArk, which will be released in 2020. Secrecy still surrounds the project, but it’s known that it will take inspiration from how Woodpeckers protect themselves from brain injuries while hammering their beaks into trees in order to provide better protection for children in a car crash.

Stephenson’s philosophy goes further than that, though. He believes that safety should be a much higher priority for designers than simply making things pretty. “You’re not going to buy a product that is dangerous or that harms you, so the trend on safety is always on the up” says Stephenson.

“There has always been a trend to go safer and safer, and that’s not going to change. So if you apply that to design, and if you’re a responsible designer you’re always trying to design in safety, then it’s right at the top of that pyramid of what you’re trying to achieve with good design. It seems to me that often designers try to put up excuses for why their product doesn’t look good – you know, like when car bonnets had to be made higher because of pedestrian impact regulations.

“When designers go to that lame excuse, that it was legislation made the car ugly, that’s because they’re not thinking in the first place that there is no excuse for bad design. Not in my book. A designer has to work within parameters, safety is just one. There’s comfort, there’s ergonomics. It’s like a painter saying, ‘well, I had to use black because I ran out of red’. I think safety has to become ever more important in a designer’s brief, and it can be used for good. You don’t need to hide safety away. I hate this concept of covering up high tech, that something is innovative, is functional, then that’s part of the design. Design can make safety really attractive.

“For me the whole concept of safety is another positive thing to attach ourselves too. Safety helps the design, or at least gives us another route to take.”

That designed-in safety will be critical for the first generations of E-VTOL electric personal aircraft, and autonomous cars, says Stephenson.

“The E-VTOL, the whole thing is so cutting edge, it’s so exciting, it’s disruptive, it’s bringing a potentially huge change to the challenges of mobility. And everyone’s like, ‘yeah, that’s cool sci-fi, but is it going to work?’ Well, yeah, it’s working already, we have them flying around in our testing areas.The huge problem is safety. You can’t have these things crashing. Safety is so important. So safety in design is so important when you’re working on these things.

The younger generation are much more open to experiences

“It’s about changing public perception. It’s about getting past Henry Ford’s ‘faster horse’ paradox. The younger generation will probably be more easily convinced that things like E-VTOL and autonomous technology is safe. These E-VTOL craft won’t be certified to fly until the authorities, the civil flight agencies, are convinced that these are 10-to-the-minus-nine reliable. That means that in one billion hours of flying, you’ll have one defect. Current commercial aircraft are only 10-to-the-minus-6 reliable, which is one incident in every million hours of flying.

“So you have to design in redundancy and back-ups. If you get into one of these things, it cannot fail. You and me, anyone above 40, might be nervous getting into one but the younger generation are much more open to experiences. Like anything, it will take time and the more it operates the more people will be convinced. But the coolness factor, the convenience factor will win out. And you don’t need big infrastructure, you don’t need roads, you just need verti-ports, which are pretty compact.”

As for autonomous cars, Stephenson reckons that, design or no design, their greater safety levels will soon render them indispensable: “Cars are so safe now that, certainly on the motorway, you’re going to have to start getting rid of the ‘dumb’ cars because they’ll start crashing into the smart cars.”