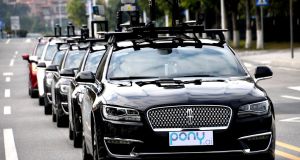 According to the Minister for Transport, Shane Ross: “Our priority is always the safety of our roads for all users.”

The Government is to introduce legislation to allow for the testing of autonomous vehicles on Irish roads.

The Department of Transport say that Cabinet has agreed to support a range of measures to be delivered under the Future Jobs Initiative.

The Road Traffic (Miscellaneous Provisions) Bill will be amended in the Oireachtas to allow for testing, under strict guidelines, of vehicles in autonomous mode.

The Minister for Transport, Shane Ross, said: “Of course, our priority is always the safety of our roads for all users. But this is a rapidly developing sector right across the globe, including in the EU, and it is important that we make the most of these developments for not just transport, but also the wider economy.

“There are real opportunities to grow jobs, while also finding ways to make our roads safer and more efficient and even sustainable. That is why I am bringing forward legislation to enable new provisions to facilitate testing, within strict guidelines, of cars in autonomous mode on our roads. We are eager to facilitate this growing technology, but as always, safety for our road users remains our top priority.”

At present the law requires that the motorist be in charge - and responsible - for the vehicle. The latest systems on sale with new cars allow for some braking and steering functions to be operated by the vehicle’s software, through features like adaptive cruise control or lane-keeping assist. The next level of autonomous driving - so-called Level 3 autonomy - means that at certain times the vehicle will be fully in control. That’s where the changes in legislation are required.

So far, any testing in Ireland has been done on private land or via simulators. But there is a significant hub of research in the west of Ireland ready to take advantage of any changes. For example, Jaguar Land Rover recently opened a major research facility in Shannon. Lero, the Sciene Foundation Ireland funned software research group, last year announced a collaboration with Valeo, the French car components and technology giant, in order to develop new sensor technology for autonomous cars. Valeo has an 1,100-strong research and development group, based in Tuam, and has been collaborating with NUI Galway for almost two decades now. When it comes to autonomous driving, the West’s awake.

1 Whiskey a go go: sales top $1bn in US
2 ‘Life in Vilnius reminds me of Ireland in the 1990s’
3 Dating apps move past their shaky start
4 The ‘gangster’ superior, the Irish priest and the wealthy widow
5 Boeing identifies new software flaw in grounded 737 Max
6 The Irish economy is thriving but if you’re not feeling it – here’s why
7 Glencore puts Chad oil business up for sale five years after purchasing it
8 Luck, timing and a few master strokes key to Comer brothers’ success
9 Real price of cheap credit? Unaffordable homes
10 Dublin housebuilder records €11m gain after striking deal with bankers
Real news has value SUBSCRIBE