Sadly at circa €300,000 its reserved for only the most affluent petrolheads 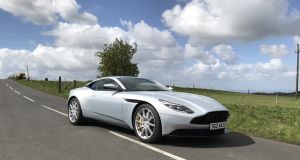 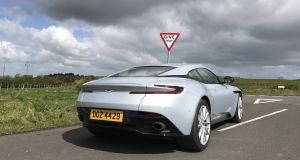 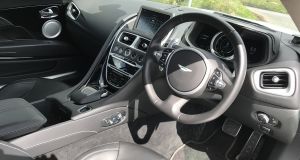 Even Aston Martin is getting into the downsizing game. As car makers left and right abandon both big engines and diesel in an effort to be (or at least appear) more eco-friendly, so the cubic capacity pigeons have come home to roost at Aston. For a car maker which once bored its 5.3-litre V8 out to 7.3-litres in search of more power, that must be a touch depressing.

Yes, it’s true - Aston’s long-lived 6.0-litre V12 engine has been chopped in capacity. A whole 800cc has been lopped off, leaving it with just 5.2-litres with which to play. Oh, and two turbochargers, and 600hp, and 700NM of torque delivered at 1,600rpm. Wow, downsizing has never been so successful.

The effort is all about emissions, of course, as even Aston isn’t immune from having to cut its Co2 figures. The new engine (related to but much modified from the old Ford-based V12 unit) is all about keeping up the power but bringing down the carbon, and it’s successful - 265g/km may still sound rather high, but for a V12 engine with this much grunt, it’s hardly too bad.

This is also the first Aston Martin to benefit from the car maker’s alliance with Mercedes-Benz. Merc took a five per cent chunk of the company (the rest is owned by Qatar Investments and Investindustrial) and in return Aston gets to use Merc’s electronics, a considerable advantage for a small sports car maker which would struggle to spend the cash to develop such things as sat-nav or voice control.

The drivers door, popped by opening a flush-close door handle, opens at the same dihedral angle as have all Astons since the 2003 DB9, but when you flop down into the cabin, you’ll really notice a change. There is much more useable space in the front (the back seats remain entirely pointless) than you would have found in the old DB9, with lots of headroom and comfortable legroom.

There are some visible Mercedes switches in the cabin (column stalks, the rotary controller for the infotainment screen) but they don’t jar like the cheap old Ford switches once did in the DB7 (although the plastic surround for the digital instruments looks dreadful). The overall design seems a little less distinctly Aston-ish than before, but the layout is simple and easy to use and it’s a car in which you feel instantly comfy and at home.

That’s just as well, because with 600hp on board, this has the potential to be quite a beast. Press the glass starter button mounted in the centre of the dash to wake the engine. You can press and hold for a discreet start-up, for early morning ventures, but this being lunchtime, we dispense with that and go for the quick blare of revs as the engine kicks into life. There is, it would seem, no penalty in aural entertainment for fitting those turbos. Some turbo engines become muffled and less invigorating, but the DB11’s big twelve still sounds raspy, urgent, and slightly addictive.

We nose out into traffic into GT mode, the softest of the three settings for the throttle, gearbox, and adaptive dampers (developed by Bilstein). Around town the DB11 feels slightly stiff over bumps, but not outrageously so. It’s clearly a car designed to flex a little in the interest of comfort. The eight-speed ZF automatic gearbox is exceptionally smooth, shifting almost without you noticing and so the DB11 glides along, a shark amongst mid-town shoals of cod.

Time to find some open road. Out beyond the city limits of Belfast, we hit the road to Dundrod, once home to the TT road race and a happy hunting ground for Aston. The road loops and curls over the Antrim hills, and the DB11 can let rip, just a little.

Switch up into Sport mode now (should a 5.2-litre V12 turbo really need a Sport mode?) and the the dampers are on their middle setting, the throttle a little sharper. And the Aston lets its animal side out for a play. With 600hp it was never going to be slow, but the DB11 delivers its power with exceptional precision. Stand on the throttle and you’ll spur the car forward in a series of fits and starts as the traction control, even on a dry smooth road, struggles to put the grunt to the tarmac.

You can feel the electronics and the rear diff swapping power from side to side as the rear tyres paw at the road. Better to be a little smoother, and instead of stamping on the accelerator, give it a long, deep, meaningful shove. Then the power feeds in much more progressively, in spite of that low-lying torque peak, and the Aston rockets up the road with a deal more composure.

Actually, the chassis - almost Porsche-like in its sense of precision and deftness - is adept at controlling that massive power in a way that makes this circa-€300,000 car feel incredibly friendly and biddable. Only the steering is a slight weak link; electrically boosted it’s well weighted and points that gorgeous nose precisely into corners, but the feel and feedback of, say, the smaller Vantage, is slightly lost in transmission. Switch to Sport + mode and all hell breaks loose, with savage gearchanges (made artificially heavy-handed, Lamborghini-style) and less traction and stability intervention. Mad, but fun for brief periods.

Perhaps a car such as the DB11 doesn’t need ultra-sharp steering. Back in aptly-named GT mode on the motorway, the DB11 effortlessly wipes miles away, aside from a touch too much tyre rumble from the back. A big V12 coupe, designed for crossing continents in a single bound, is hardly in the front row of the zeitgeist show, and surely such cars can’t be built for too many more years, as emissions and batteries start to dominate the car world. Still, as the embers die slowly in the internal combustion fire, Aston Martin has created one of the best cars in its 100+ year history, a V12 GT with comfort, precision, balance and sheer ferocity from its, admittedly smaller, engine. Something to be savoured and enjoyed before the robots take over.

Verdict: DB11 is utterly gorgeous and that turbo V12 is one for the ages. But the price should make owner’s blush.