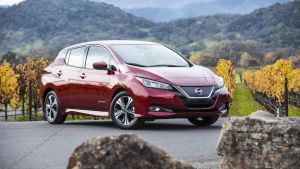 The 62kWh Nissan Leaf lacks for one major item relative to its opposition: range

It was supposed to be a thing of the past by now. Range anxiety, I mean. It was supposed, by the advent of big batteries in electric cars, to have been banished to the realm of forgotten reflexes and ignored instincts. However, as the new, big-battery, longer-range version of the Nissan Leaf proves, that’s not quite the case.

It’s a little hard to overestimate the importance of the Leaf. Until Tesla burst, noisily and rambunctiously, on to the motoring scene, it could be said that the Leaf was more or less single-handedly going about the work of proselytising the word of the electric car to the people at large. That first-generation model may not have had much range (just 160km, and that in ideal circumstances) but it got the ball rolling.

This second-generation Leaf dialled back on the aquatic-creature styling (more’s the shame) and ramped up both the car’s air of conventionality and its battery performance. The initial 40kWh battery version has pretty decent one-charge range of 270km on the official test, and about 200km in real-world terms.

Now comes the 62kWh version, boasting longer range and flirting with the idea of being all the electric car one might ever need. With the extra battery capacity and range – now up to 385km on the official test – has come an increase in price. The cheapest 62kWh version of the Leaf costs €37,840 after grants. This SVE model we’re testing costs €40,500.

That’s not out of line with other manufacturers’ prices for cars with 62kWh batteries, and it does encompass a lengthy list of standard equipment, including a cracking Bose stereo (whose amplifier does admittedly eat into boot space a little), an eight-inch infotainment touchscreen and a full suite of safety equipment and driver aids, including smart cruise control, lane-keeping steering, blind-spot monitor and more.

However, the 62kWh Leaf lacks for one major item relative to its opposition: range. That 385km range may sound impressive in isolation, but in wider terms it’s not. Fully charge up a rival Hyundai Kona Electric or Kia e-Soul and you’ll be greeted by a theoretical 450km range, and a probable actual 420km journey limit.

The Koreans are better at holding on to that charge too. My usual test for any electric car is simply to drive it home from Dublin. That may not sound especially stringent but my home is in Belfast, and that means a lengthy motorway journey between one and the other.

Motorway miles are the hardest yards for an electric car – lots of power being drained, limited opportunities to recoup power through regenerative braking – so whether I make it home without stopping to recharge, or how much range is left in the battery when I do get home, seems like a pretty good indicator of how an electric car will perform when presented with its toughest of tasks.

In the case of a recent test of the Kia e-Soul, the battery Korean crossover did that journey in one hop and I arrived back at my front door with just under a half-charged battery remaining. In fact, for my first couple of days driving the e-Soul, I didn’t bother charging it up, so good was the battery at holding on to range.

The Leaf? Not so much. A brief diversion on the way home to Maynooth meant that we were going to be on the losing side of range depletion, so early on I resigned myself to a lengthy stop near Dundalk to strap the Leaf on to a fast charger. The Leaf has two charging ports – a Type 2 plug for home charging or 22kW public chargers, and a CHADEMO port for 50kW fast chargers.

That arguably leaves the Leaf out on a limb, as most manufacturers are now moving to the CCS-type fast charger, but for now at least it works okay, and the Leaf sucked down a roughly 50 per cent charge in about an hour while I sipped coffee and caught up with emails.

Back home, I found that the Leaf needed topping up rather more than I was hoping (living in a terraced house means I have no home charger so must throw myself on the mercy of the public charging system when I need juice) as the battery seemed to be depleting quite quickly. Is this a result of Nissan sticking with air-cooling for its battery, when Kia and Hyundai have moved to more sophisticated liquid-cooling? Quite possibly.

Finally, then, on the return journey to Dublin, the Leaf did manage to do it in one hit, but without the comfort levels of the Koreans. A constant watch was needed on the range-to-recharge figure, and constant mental maths needed to calculate if I had enough in reserve to reach my destination.

I did, but possibly only because a knot of heavy traffic where the M1 meets the M50 reduced our speed, and therefore our power demands, just as the battery was running very low.

The rest of the Leaf doesn’t make a terrific case for itself, either. The cabin was already looking and feeling a touch cheap for a car whose price tag, as a 40kWh model, starts at €29,890. In a €40,000 version, not matter how much nice leather and big screens you throw at it, it just looks quite shabby.

The Leaf is also deeply unexciting to drive, and we know from the likes of the BMW i3 and Tesla Model 3 that this need not be the case where electric cars are concerned.

The Leaf’s best dynamic trait is that it’s very comfortable around town, where the gentle ride quality eases away urban lumps and divots. On the open road, it’s a snooze, not least because with that constant tingle of range anxiety, you never dare access the extra power granted by this new 217hp electric motor.

That is all much more acceptable in the basic 40kWh Leaf, which while certainly not perfect, has the twin virtues of decent range and relative affordability. At that point, you can deal with a little range anxiety, and the cabin doesn’t grate so much. At the price point of this 62kWh version, such shortcomings are far less palatable.

With the 62kWh version, Nissan’s reach seems to have exceeded its grasp. The unpalatable truth is that it’s well beaten by the Koreans at the game the Leaf itself started.