81: Volvo XC90 – Getting older but still the landmark for Swede’s revival

Top cars for 2019: Roomy, comfy, good to drive, and incredibly safe but rivals are starting to catch up now 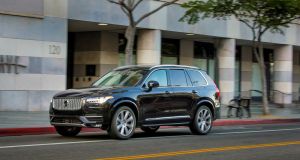 Volvo XC90: The big seven-seat SUV was the car that kicked off the current design and engineering revolution at Volvo

Volvo’s big seven-seat SUV was the car that kicked off the current design and engineering revolution at Volvo. Funded by Chinese money (from Geely, the giant Chinese car maker that has owned Volvo for the past several years) it was the first car to use Volvo’s new SPA modular platform (now also under the S90 and V90, XC60, V60, and S60) and the first to use Volvo’s ‘Sensus’ touchscreen infotainment system.

That’s the one that looks like an iPad set into the dash, and which has quickly become the gold standard for such systems. You can tell that the XC90 is getting on, just a little now. Younger models, such as the XC40, and V60, are taking the same basic set of ingredients and making something that tastes fractionally fresher and sweeter.

Not that the XC90 is poor, in any sense. It’s still roomy, comfy, good to drive, and incredibly safe but rivals are starting to catch up now. T8 plugin hybrid is clever, but very thirsty in real-world conditions.

Sum up: The building you’re sitting in while reading this? Yup, not as safe as an XC90.

The heat is on: seven hot looks for radiators
Real news has value SUBSCRIBE