68: Volkswagen T-Roc – Stylish design not quite matched by driving flair 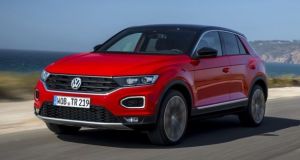 To be honest, we had expected the T-Roc to become VW’s best-seller, ahead of the Golf. Instead, so far in 2019 in Ireland, it’s the Tiguan that’s taken that prize, but the T-Roc still has its appeal.

That appeal lies chiefly in its styling, which is chunky and appealing, and which works best if you go for a strong, bright colour - greys and blacks just make it fade anonymously into the background. Anonymous is a pretty good summation of the driving experience.

The T-Roc’s biggest failing, though, is its interior which, although sufficiently roomy, just looks and feels too cheap for a car costing this much. It’s not an unlikeable car, but all in all we’d rather have a Golf for the same (or less) money.

Sum up: Not a favourite, but a well-thought out product.